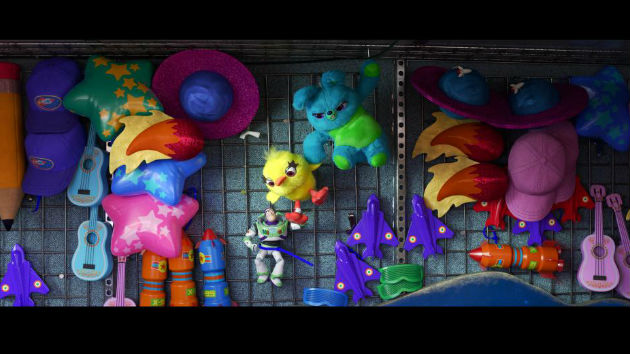 (NEW YORK) — Woody, Buzz and all your old favorites are back for Toy Story 4, the latest installment in the Disney-Pixar franchise, which opened in first place this weekend. This time around there are also new favorites to love — including the DIY trash-turned-toy Forky, voiced by Tony Hale, and carnival prize stuffed animals Ducky and Bunny, voiced by Keegan-Michael Key and Jordan Peele, respectively.

While fans turned out in droves to the see the film this weekend, Keegan-Michael Key says that as a voice actor in the film, he had a very different viewing experience when he finally got to see his character come to life.

“It was really fulfilling and very satisfying to go, ‘Oh, oh yeah!’ Like, everybody else around you might be laughing but you’re going, ‘Now I get it. Now I see what you were doing,’” he tells ABC Radio.

Hale, meanwhile, loved that he got the chance to see the film with his 13-year-old daughter.

“The cool thing is she’s not able to see a lot of the work that I do,” Hale tells ABC Radio. “I mean she’s not gonna be able to see Veep until she’s late middle age. So, you know, we can enjoy this together.”

And kids all over can enjoy Forky, Ducky and the whole gang in actual toy form, as tie-in merchandise. Hale says that part is surreal.

“It’s one of those wake-up times where I’m like, ‘Oh, yeah, I am in Toy Story. This is not some kind of dream,’” he says.  “’Cause I saw when we were in Orlando, all these kids were carrying around Forkys …so it’s neat to see it kind of live out in these kids’ lives. It’s pretty exciting.”