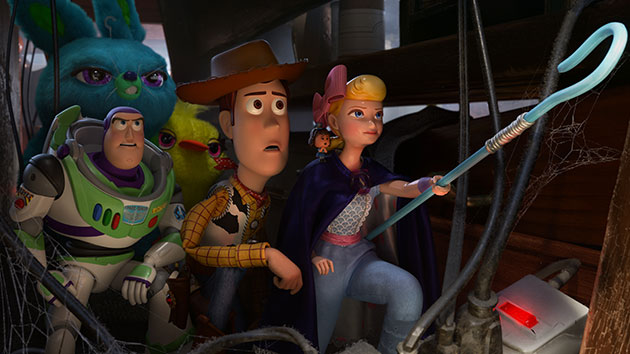 (NEW YORK) — Disney and Pixar’s Toy Story 4 topped the weekend box office with a an estimated $118 million debut — a franchise high, topping Toy Story 3’s $110.3 million opening back in 2010. However, as has been the case with most sequels of late, it opened well below the $140 to $200 Disney had projected.

Landing in second place was the second of this week’s debuts, Child’s Play, a remake of the classic 1988 horror flick of the same name, featuring Mark Hamill as the voice of the killer doll Chucky and a live-action performance from Aubrey Plaza. It delivered an estimated $14 million domestically, right at the low end of pre-relaese expectations.

Disney’s Aladdin held on to third place in its fifth week of release, earning an estimated $12.2 million and bringing its totals stateside to just below $288 million. The film’s overseas tally now stands at $522 million, with its worldwide gross now standing at around $810 million.

Disney is the parent company of Pixar and ABC News.

Men in Black: International fell from first to fourth place in its second week of release, grabbing an estimated $10.75 million. The Secret Life of Pets 2 rounded out the top five with an estimated $10.3 million.