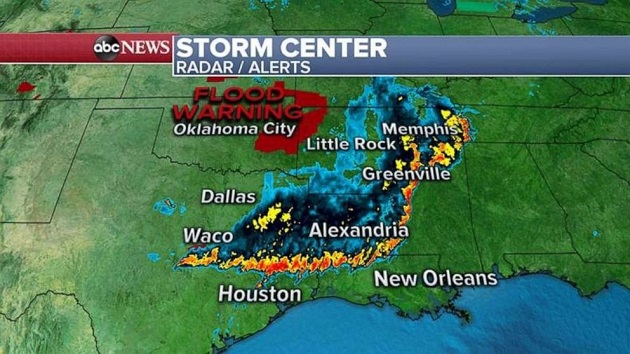 (NEW YORK) — More than 200 severe weather reports stretching from the Plains to the Southeast on Sunday included a reported tornado near South Bend, Indiana, that damaged a building but injured no one. About 4 to 6 inches of rain fell in southwest Missouri in fewer than six hours, resulting in a flash flood emergency for parts of that area. Devastating flash flooding was reported in Newton and McDonald counties. Heavy rain — more than 4 inches locally, in parts — also was reported in Kansas. The town of Ellsworth reported hail as large as hens’ eggs. Wind gusts of up to 70 mph were reported from Texas to Indiana.Radar on Monday morning showed a line of strong to severe storms from Texas to Tennessee, with very heavy rain and locally damaging winds.The severe weather should slide south into parts of southeast Texas and Louisiana later Monday morning, but the storms are forecast to lose some of their intensity.This weather is part of a slow-moving storm that’s heading through the central and eastern U.S. As the storm’s warmer sector moves toward parts of the Midwest and Appalachia, more severe weather is expected.Cities including Milwaukee, Indianapolis, Cleveland and Pittsburgh all could be at risk for strong wind and large hail — possibly a brief tornado — in the radar map’s “slight risk” region.More severe weather on Tuesday is likely in parts of the Midwest, with strong winds, large hail and brief tornadoes possible.The Southeast is heating up. Temperatures and humidity will be on the rise Monday and Tuesday, when Heat Index values will reach triple digits from New Orleans to Miami.