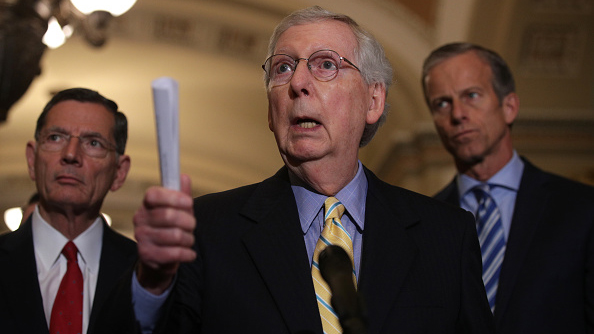 (WASHINGTON) — Sen. Mitch McConnell is scheduled to meet with 9/11 first responders this week to discuss the renewal of the September 11th Victim Compensation Fund Act, following a public feud with comedian Jon Stewart.McConnell’s office has not confirmed the meeting, but a Ground Zero recovery worker and longtime activist, John Feal, confirmed the meeting to ABC News. Feal added that he requested the meeting, which will be held Tuesday.”I don’t think he would have just openly invited me,” he told ABC News.Earlier this month, Stewart made an emotional appeal to Congress to make the victim compensation fund permanent. With first responders and their advocates behind him, Stewart ripped Congress for failing to fully fund the program.”They responded in five seconds, they did their jobs. With courage grace, tenacity, humility. Eighteen years later, do yours!” he shouted. The September 11th Victim Compensation Fund, which Stewart and others have battled to protect for years, is set to run out of money in December 2020.”These cuts are real,” Feal said Monday. “Tomorrow will be my 270th trip to Washington in 15 years. I’ve got a chip on my shoulder. I’m seeing people get sick, friends die. Their families are going to be left in financial ruin.”Stewart has called out McConnell on several occasions for his inaction in the past regarding the bill. Stewart promised in his testimony before Congress that he and other advocates won’t allow a “certain someone” in the Senate to use the program as a “political football” in spending negotiations, referring to McConnell.McConnell retaliated on “Fox and Friends” saying he didn’t know why Stewart was “bent out of shape,” and denied that he was moving slowly on the issue. He also said the extension would pass when it came up for renewal.Stewart fired back on the “The Late Show with Stephen Colbert,” arguing that he was “not bent out of shape.” He said he was upset that heroes were getting sick or dying and desperately needed Congress’ help.”These are the first heroes and veterans and victims of the great trillions of dollars War on Terror. And they are currently dying, suffering and in terrible need,” he said. “You know you would think that would be enough for Congress to pay attention, but apparently, it’s not.”