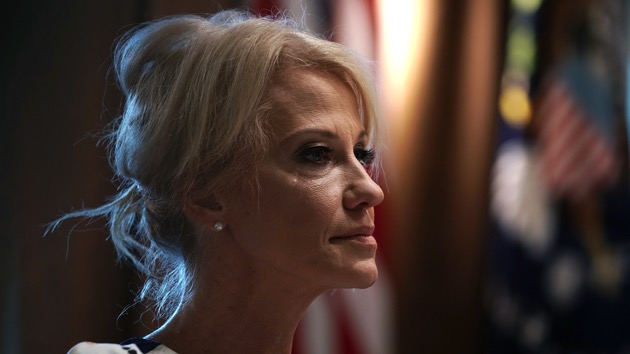 (NEW YORK) — One of President Donald Trump’s senior advisers, Kellyanne Conway, personally defended herself on Monday against the recent accusation from a federal watchdog agency that she violated the Hatch Act and should be “removed from service.””They want to silence me now,” Conway, whose formal title is Counselor to the President, said in an appearance on Fox and Friends.”This is my First Amendment right. They want to chill free speech because they don’t know how to beat him at the ballot box,” she said.The Office of Special Counsel, an independent federal agency that investigates wrongdoing by government employees, said on June 13 that Conway “violated the Hatch Act on numerous occasions by disparaging Democratic presidential candidates while speaking in her official capacity during television interviews and on social media.”The report cites comments Conway made during the Alabama Senate special election in December 2017, which the office found violated the Hatch Act in another report released last year.The report also mentions recent statements to White House reporters in which Conway criticized former Vice President Joe Biden and Sen. Bernie Sanders, both of whom are seeking the Democratic nomination for president in 2020.”If I’m quoting what some of the other candidates say about the other candidates, I’m just repeating the news as I read it that day,” Conway said.President Trump, despite a federal watchdog agency’s call the day before that she should be “removed from service” for using her office for political activity, said that he will not fire Conway.”No, I’m not going to fire her, I think she’s a tremendous person, tremendous spokesperson, she’s loyal, she’s a great person,” Trump said in an interview on Fox and Friends.The House Oversight and Reform Committee said in a memo to lawmakers that they will vote Wednesday to authorize a subpoena Conway if she does not appear before the panel for a Wednesday hearing on her alleged violations of the Hatch Act.”It’s not even clear to us in the White House, according to the White House Counsel, that the Hatch Act applies to assistants to the president,” Conway said.She added, “Even if the Hatch Act applies, our position is that I haven’t violated it.”In an interview on May 29, Conway reportedly downplayed the law, according to a OSC press release, saying she wouldn’t stop making political statements.“If you’re trying to silence me through the Hatch Act, it’s not going to work,” and “Let me know when the jail sentence starts,” she said, according to the OSC press release.A spokesman for the office said it’s the first time the office has recommended the removal of a White House official. In the report, sent to President Donald Trump on Thursday, the office said that Conway has not faced consequences for her repeated violations of ethics rules on government employees.The office recommended Conway be removed from her position because she has “shown disregard” for the law that prohibits federal government employees from engaging in political activities.”Ms. Conway’s disregard for the restrictions the Hatch Act places on on executive branch employees in unacceptable,” Special Counsel Henry Kerner wrote in the report. “If Ms. Conway were any other federal employee, her multiple violations of the law would almost certainly result in removal from her position by the Merit Systems Protection Board.””As a highly visible member of the administration, Ms. Conway’s violations, if left unpunished, send a message to all federal employees that they need not abide by the Hatch Act’s restrictions. Her actions erode the principal foundation of our democratic system — the rule of lawWhite House deputy press secretary Steven Groves said in a statement that the OSC’s actions are “deeply flawed.”“The Office of Special Counsel’s (OSC) unprecedented actions against Kellyanne Conway are deeply flawed and violate her constitutional rights to free speech and due process. Others, of all political views, have objected to the OSC’s unclear and unevenly applied rules which have a chilling effect on free speech for all federal employees. Its decisions seem to be influenced by media pressure and liberal organizations – and perhaps OSC should be mindful of its own mandate to act in a fair, impartial, non-political manner, and not misinterpret or weaponize the Hatch Act,” Groves said.Copyright © 2019, ABC Radio. All rights reserved.

What is Title 42? Amid backlash, Biden administration defends use of Trump-era order to expel migrants
Democrats dare GOP to vote against government funding bill
Biden challenges UN to act together on pandemic, climate change
Tyra Banks defends Olivia Jade ahead of her ‘Dancing with the Stars’ debut: “Olivia is so brave”
DOJ calls organized crime ‘alive and well’ after alleged mobsters arrested in New York, New Jersey
Senate Democrats introduce The Freedom to Vote Act