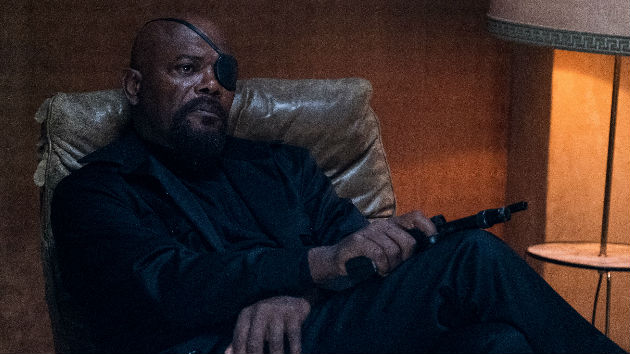 On Monday, Jackson, who’s portrayed S.H.I.E.L.D director Nick Fury since 2008’s Iron Man, took to Instagram to go off on a major blunder that Sony made in its ad campaign for Spider-Man: Far From Home.

In his post, Jackson shares an image of two side-by-side Homecoming posters that feature his Nick Fury character. However, in the poster on the left, Fury is wearing his signature eye patch on the wrong eye.

“Uhhhhhhh, What In The Actual F*** IS GOING ON HERE???!!! he captions the photo, adding the hashtags #headsgonroll #lefteyemuthafukkah.

Humorous as it may be, this isn’t the first time that there’s been a marketing blunder when it came to a Marvel superhero film.

In March, Marvel had to fix its Avengers: Endgame poster when Black Panther star Danai Gurira’s name was omitted. Of course, fans had plenty to say to Marvel when that happened.

Spider-Man: Far From Home on July 2.

Ken Jennings, Mayim Bialik to host ‘Jeopardy!’ for remainder of 2021
Fence goes up around US Capitol, as law enforcement braces for Sept. 18 protest
DOJ files for immediate injunction to halt enforcement of Texas abortion law
Wendy Williams tests positive for COVID-19; ‘The Lion King’ celebrates its return to Broadway; and more
Rachel Zegler, Ansel Elgort shine in the full trailer for Steven Spielberg’s ‘West Side Story’
Browns Star Odell Beckham to be held out this weekend