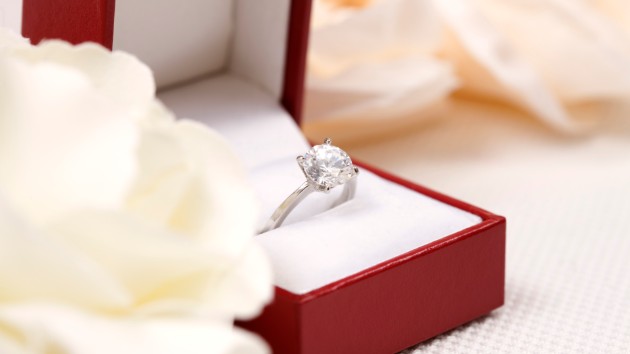 (NEW YORK) — A three-day scavenger hunt that led to what looked like a fairy tale proposal — complete with tears, dancing and going down on one knee at a chateau in France — was actually a carefully crafted advertisement.Gabriel Grossman, a VP at Morgan Stanley, popped the question to his longtime girlfriend, Marissa Fuchs, a fashion influencer known as @fashionambitionist with over 198,000 followers and director of brand partnerships at Goop. But the over-the-top multi-day romantic adventure that took the pair from New York City to the Hamptons, Miami and Paris, generated some skepticism by those who followed it unfold on social media. The pair posted the series of events on Instagram stories with the hashtag #RielLove and shared a highlight reel of the events.The elaborate proposal was revealed to be a highly produced advertising pitch after it was leaked that Grossman hoped to score sponsorships for the big moment, as initially reported by The Atlantic.One advertising executive, Bryan Pederson, who said he saw Grossman’s pitch, told ABC News it’s not clear if Fuchs knew of the plans herself. “Her friends and her fiancé — they put together a professional deck — it had all the details, there was a hashtag in there,” he explained. “She knew a deck existed, but again, I don’t think we’ll ever know for sure.” Grossman, along with the help from a social media expert and friend of his now fiancé, had offered the impending engagement to marketers at various brands and agencies, but he claimed Fuchs never knew about it. Both Grossman and Fuchs maintain that the proposal itself was a surprise and the bride to be told the New York Times, “I was completely and utterly in shock … I was so mind-blown that this was happening.”Grossman also told the Times that he paid a little under $50,000 out of pocket on dinners, hotels and flights but did score handouts from Flywheel, Glamsquad and a discount on jewelry from Jade Trau. The jewelry brand was tagged on their social media posts throughout the three day long excursion. “Jade Trau has a very close relationship with Marissa,” Grossman told the New York Times. He also said he “paid $4,000 for the pieces, but they would have been retail [for] $10,000 or $12,000.” Pedersen explained that for influencers “the space is getting more and more competitive” and that they “do things to reach audiences the way they wouldn’t have before.”The couple’s story showed how influencers have continued to push the envelope in a world where they can capitalize and monetize personal, intimate moments. “Did she know or did she not know?” Pedersen posited. “And that is what brands are really hoping for today, they’re trying to make sure that they’re still reaching consumers in that authentic way.”

Mississippi health officials warn some pregnant women have been denied COVID vaccine despite ongoing surge
Ken Jennings, Mayim Bialik to host ‘Jeopardy!’ for remainder of 2021
‘﻿Blue Bayou’﻿ shines a light on this issue that many have “no clue” about
Fence goes up around US Capitol, as law enforcement braces for Sept. 18 protest
DOJ files for immediate injunction to halt enforcement of Texas abortion law
Wendy Williams tests positive for COVID-19; ‘The Lion King’ celebrates its return to Broadway; and more