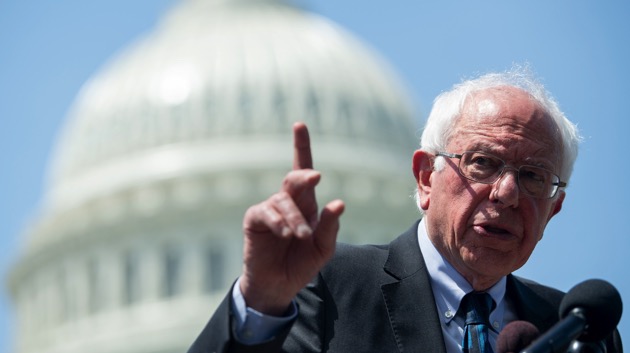 (WASHINGTON) — Sen. Bernie Sanders introduced his most sweeping plan yet to tackle the increasing cost of a higher education, introducing a bill Monday that would make public colleges and trade schools tuition free and cancel outstanding student loan debt for everyone, a proposal that goes beyond one introduced earlier this year by one of his chief presidential campaign rivals, Sen. Elizabeth Warren.At a Capitol Hill news conference, Sanders unveiled the plan to eliminate all of the $1.6 trillion of student loan debt in the U.S. held by 45 million Americans. The plan would include all private and graduate school loan debt and would apply to all persons regardless of income. The cost, he said, would be paid for by taxing Wall Street speculation.”If the American people bailed out Wall Street, now it is Wall Street to come to the aid of the middle class of this country,” Sanders said, referencing efforts by the federal government banks and lenders deemed “too big to fail” during the Great Recession of the late 2000s.”The millennial generation was told that the only way they would get the good jobs available is if they received a college education,” he continued. “Unfortunately, that turned out to be bad advice.”

Sen. Bernie Sanders introduces a "revolutionary" plan to cancel $1.6 trillion in student debt for everyone: "This proposal will make it possible for every person in America to get all of the education they need, regardless of their financial status" https://t.co/ERXmslESrN pic.twitter.com/NEKUceMdS2

Student-loan forgiveness and tuition-free colleges have been a main component of Sanders’ rise as a presidential hopeful, garnering sharp criticism from both the left and the right for his ambitious, and expensive, proposals. Critics argue that the revenue generated by Sanders’ proposed Wall Street taxes would not fully cover the costs of the plan, or that the money would be better spent directly assisting those in poverty, rather than persons whose education and degrees have already left them with increased upward mobility.This student loan forgiveness component of the plan is coupled with a larger initiative to make all public universities, community colleges, and trade schools tuition-free, which would also be paid for by the new set of taxes on Wall Street, including a 0.5 percent tax on stock trades and a 0.1 percent tax on bonds.

Sen. Bernie Sanders says his plan to cancel $1.6 trillion in student debt will be "fully paid for by a tax on Wall Street.""The American people bailed out Wall Street. Now it is time for Wall Street to come to the aid of the middle class of this country" https://t.co/ERXmslESrN pic.twitter.com/BAYEKLYvah

At the news conference, Sanders was flanked by Reps. Pramila Jayapal, D-Wash., Ilhan Omar, D-Minn., who are introducing the House version of the bill, and Rep. Alexandria Ocasio-Cortez, D-N.Y., an additional supporter of the legislation. Sanders argued pursuing a higher education should not economically punish young Americans.”The result is that many millions of young people today are forced to work at low wage jobs,” Sanders said. “Bottom line is we should not be punishing people for getting a higher education, it is time to hit the reset button under the proposal that we introduced today, all student debt would be cancelled in six months by taking this action.”Ocasio-Cortez, who at age 29 last year became the youngest woman ever to win a seat in the U.S. House of Representatives, claimed that her election victory was “easier” than paying off the student loans she continues to carry.”That should tell you everything about the state of our economy and the state of quality of life for working people, because in order for me to get a chance to have health care, in order for me to get a chance to pay off my student loans, I had to do something that was nearly impossible,” Ocasio-Cortez said. “And I don’t think that that is the bar for which a person should be able to access education, health care, and a bevy of other things that should be considered human rights.”Monday’s proposal is not be the first time Sanders and Jayapal have teamed up to propose legislation to tackle tuition, although their previous proposals pale in comparison to this most recent bill.In 2017, they introduced the “College For All Act” which would make public colleges tuition-free for families making up to $125,000 and expand loans for lower-income students looking to attend private universities.With just two days before the first Democratic presidential debate on Wednesday, Sanders’ proposal may be another way to further distinguish himself from his fellow presidential contenders, even as some of them, longtime friend Warren included, have proposed their own plans to tackle this issue.Warren’s plan would cancel up to $50,000 in student loan debt for people with a household income under $100,000. Those who make more, up to $250,000 would also get some debt cancellation. But the Massachusetts senator’s plan stops short of relieving debts for those who make more than $250,000.The Vermont senator spoke to the rationale Monday for not setting income limits for either proposal, comparing the plan to others that are provided to all Americans, such as Social Security, and arguing that wealthier people would pay their share in other ways.”I happen to … believe in universality, and that if Donald Trump wants to send his grandchildren to a public school, he has the right to do that,” Sanders said, adding, “Now, our response to making sure that this does not benefit the wealthy is in other areas, we are going to demand that the wealthy and large corporations start paying their fair share of taxes.”Copyright © 2019, ABC Radio. All rights reserved.