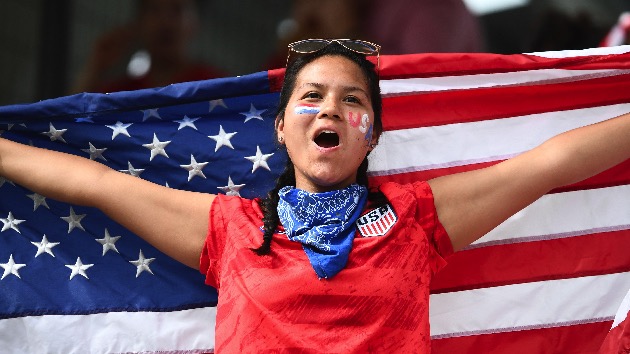 (LE HAVRE, France) — As the U.S. Women’s National Team (USWNT) gears up for its first game in the knockout round of the 2019 FIFA Women’s World Cup, Americans in France are super excited for the players.”They’re really inspiring and, just — it’s [great] to see them play,” Leah Beaubien, an 11-year-old from Avondale Estates, Ga., told ABC News outside the stadium in Le Havre before last Thursday’s match against Sweden. “It makes me really happy, and you know, it’s just really inspiring.”Her friend Ella Pearson, 12, from Decatur, Ga., agreed that it was “very exciting.””They’ve had some obstacles in their life, but they just had to face them and move on, and I just think that’s really inspiring to all of us and to fans,” Leah explained.The USWNT has been making an historic run in this World Cup, which started with a record-breaking win over Thailand.The team’s push for the cup continues Monday with a match against Spain at noon E.T. Now that they’re in the knockout stage, the defending world champions face elimination with each game until the end of the tournament.Meanwhile, scores of Americans have flooded France to watch the athletes. Parents are bringing their kids, some of whom are soccer players themselves.”Any time I watch each one of them play, it comes out in my own game,” said Finley Scott, 12, of Illinois, explaining how she’ll mimic Julie Ertz or Alex Morgan to get around defenders to score.Plus, her friend Lucy Corley, also 12, added, “If something bad happens, they’re also really good role models. It teaches us good things [about] how to play the sport.””They inspire us to dream big and stuff,” said 11-year-old Sole Corley.Like many American fans out to see the matches in France, Lucy and Finley are not just invested in the USWNT’s on-field play; they’re also following the women’s fight for gender equity. They had with them a sign reading “better play, equal pay” although World Cup security bars signs in the stadium, so they had to leave it in the car.The women are teaching them, Lucy said, “if you want something to fight for it.”Over the weekend, a spokesperson from U.S. Soccer confirmed to ABC News that the USWNT and the U.S. Soccer Federation tentatively agreed to mediation in the gender discrimination lawsuit 2015 team members filed in March.”The women are paid under a different structure than the men, which they preferred and specifically negotiated for, but that doesn’t mean they are compensated less by U.S. Soccer,” a U.S. Soccer spokesperson told ABC News. “We will readily admit that FIFA pays more prize money out to the Men’s World Cup than the Women’s World Cup, and we support FIFA increasing prize money for the Women’s World Cup, even beyond the fact the prize money was doubled for 2019.”Although there are differences in the men’s and women’s contracts, many of the fans in France see equal pay as a simple answer.”They’re working just as hard; they’re having more success. They deserve at least equal pay,” said Jon Chambers, who came to France from the Bay Area along with his wife and their two teenage sons.Regardless how the lawsuit goes, fans know this tournament will have a lasting impact.”I think it’s great for girls,” said Lisa Little of Austin, Texas. “I think it’s great for them to see how powerful these girls can be and how they work so hard to be successful. I think they’re a great influence for younger girls.”For Sue Holliday and her daughter, Rebecca Holiday, 22, coming to the World Cup together is fulfilling a “dream” for Rebecca, who grew up playing soccer and following the team. The trip is even sweeter as she’s about to graduate college.”Our whole family loves soccer and this is a trip of a lifetime and spending it with Rebecca was priceless,” Sue Holiday told ABC News.Monday’s match against Spain will be broadcast on FS1 and Telemundo.Copyright © 2019, ABC Radio. All rights reserved.