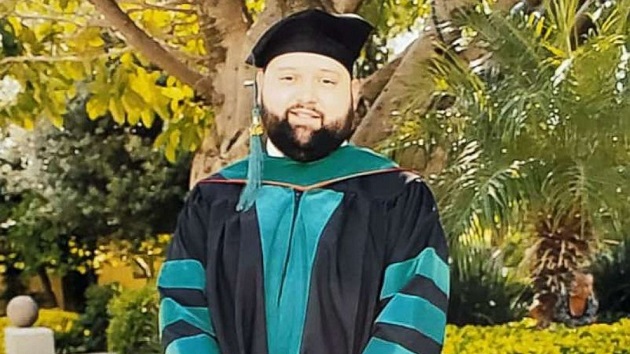 Romero was found beaten and shot to death two days later, and Mexican authorities feared Pacheco may have suffered a similar fate. But things took a twist when Pacheco boarded a Dallas-bound flight with his mother, later saying he had no recollection of what had happened to his friend.On Sunday, Pacheco said he “blacked out” after leaving a graduation celebration at a nightclub in Mexico’s second-largest city, Guadalajara. He said the “complete blackout” left him scrambling for answers and that he couldn’t remember anything between the celebration and boarding a plane in Mexico.”All my family, friends were there. We were just celebrating and next thing you know [I] blacked out,” he said during a news conference alongside his family. “I thought my life was over.”Pacheco, who attended the university’s medical school for 2 1/2 years but finished his residency in Arkansas, said he hadn’t spoken with Mexican authorities since returning to the U.S.”There are things that we don’t know, and that’s what they [authorities] are trying to figure out because we just don’t know,” Pacheco said.”We don’t know who he was with, who had him,” his mother, Vilma Franco, added. “We don’t know nothing.”His family declined to say how they made contact with Pacheco in Mexico.Authorities previously said they believed Pacheco’s disappearance and his friend’s killing occurred in the Providencia neighborhood of Guadalajara on Saturday, according to a statement from the Jalisco State Prosecutor’s Office.Romero, a California native, was found beaten and shot to death a few blocks away from where he was last seen alive, authorities said.No arrests have been made in the case. Copyright © 2019, ABC Radio. All rights reserved.