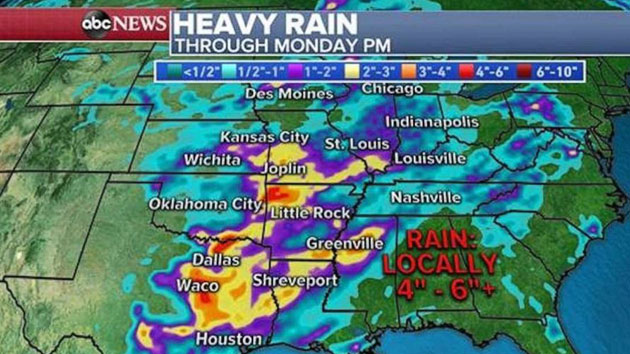 (NEW YORK) — A complex storm system is bringing the next round of severe weather and flash flooding in the Plains Sunday morning and it will bring more severe weather from Texas to Pennsylvania through Monday.Late Saturday night, a powerful line of storms moving through parts of Kansas brought wind gusts up to 80 mph. The same system brought at least 5 inches of rain to parts of Illinois on Saturday and caused flash flooding around eastern Kansas and western Missouri.The radar was very active Sunday morning with multiple clusters of strong to severe, slow-moving thunderstorms moving through parts of the Plains, including Kansas, Oklahoma, Arkansas and Missouri. A severe thunderstorm watch was in effect for parts of Oklahoma and Kansas, including Wichita, Kansas, and Oklahoma City, through 10 a.m. local time.Also, storms across eastern Oklahoma and western Arkansas will likely last through the morning hours and could drop over 6 inches of rain and lead to dangerous flash flooding.The main line of storms will move southeast through parts of Texas, Oklahoma, Arkansas and Missouri through the day and bring additional heavy rain, flooding and damaging winds.Severe storm activity will likely bring damaging winds, large hail and brief tornadoes from northern Texas to southern Illinois by the early morning hours. There is an enhanced risk of severe weather across parts of northern Texas and southeast Oklahoma, where storms could become the most intense and widespread Sunday evening.Storms will continue to push south overnight Sunday into Monday and move into eastern Texas and parts of Mississippi. Heavy rain and flash flooding will continue to be an issue with these storms, but the intensity will decrease as they approach the Gulf of Mexico.Meanwhile, storms will fire along the warm front of this storm system and bring scattered thunderstorm activity across parts of the Ohio Valley and eastern U.S. on Monday. There is a slight risk of severe weather from Kentucky to Pennsylvania, where a couple of storms could turn severe on Monday with damaging winds and large hail.This storm system is moving quite slowly and will likely bring 4 to 6 inches of rain to parts of the southern U.S., which could cause flash flooding.It can’t be emphasized enough that parts of the south-central Plains and Midwest — from Texas to Missouri to the Ohio Valley — have seen one to two times their average rainfall this year-to-date. Much of this rain has come in the last four to six weeks and could cause flash flooding fairly easily.Copyright © 2019, ABC Radio. All rights reserved.