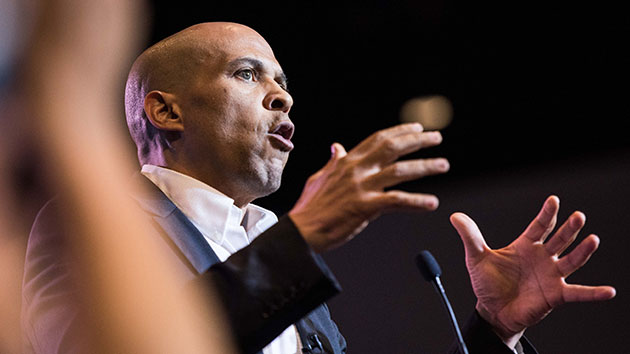 (NEW YORK) — Days ahead of the first Democratic debates and following a week of back-and-forth with former Vice President Joe Biden over comments he made about finding consensus with Southern Democrats in the Senate who supported segregation, Sen. Cory Booker, D-N.J., said Biden did not seem to fully grasp the impact his comments on the African-American community, during an interview on ABC’s This Week.”He is a presidential nominee, and to say something — and again, it’s not about working across the aisle; if anything, I’ve made that a hallmark of my time in the Senate, to get big things done and legislation passed — this is about him invoking a terrible power dynamic that he showed a lack of understanding or insensitivity to by invoking this idea that he was called ‘son’ by white segregationists who, yeah, they see in him their son,” Booker told This Week Co-Anchor Martha Raddatz.On Wednesday, Booker released a statement with strongly worded language calling on the former vice president to apologize for praising segregationist senators while at a fundraiser. That same day — which happened to be Juneteenth, a holiday celebrating the abolition of slavery — Booker had testified before a House Judiciary Subcommittee on reparations.”You don’t joke about calling black men ‘boys,"” Booker wrote. “Vice President Biden’s relationships with proud segregationists are not the model for how we make America a safer and more inclusive place for black people, and for everyone.”Biden initially called on Booker to apologize to him, saying, “He knows better. There’s not a racist bone in my body.”He added Saturday during an event in South Carolina that his use of the word “boy” was taken out of context.On This Week, Booker explained that in the wake of Biden’s original remarks, he’s heard from “many African-Americans” who told him that they found the words “hurtful,” but he also characterized the vice president’s comments as a “mistake,” though one that the former vice president should have been more mindful of.”We make mistakes. We sometimes tread upon issues that maybe we aren’t knowledgeable of,” the senator said. “I don’t think the vice president should need this lesson, but this was a time for him to be healing and to be helpful — especially the time that he is looking to bring this party together and lead us in what is the most important election of our lifetime.”According to ABC News reporting, Biden called Booker shortly after a CNN interview to talk about the situation. Booker said Sunday on This Week that, while he was disappointed, the pair “had a very constructive conversation” and that he maintains “a tremendous amount of respect and appreciation for the vice president.””That’s why, again, I felt it really, really important, especially with our friends, not to sweep things under the rug, but to be candid and straightforward with each other,” Booker said.By Friday night, both Biden and Booker were seen shaking hands at Democratic Rep. Jim Clyburn’s “World Famous Fish Fry” in Columbia, South Carolina, a gathering that attracted an additional 19 members of the crowded presidential field.Copyright © 2019, ABC Radio. All rights reserved.