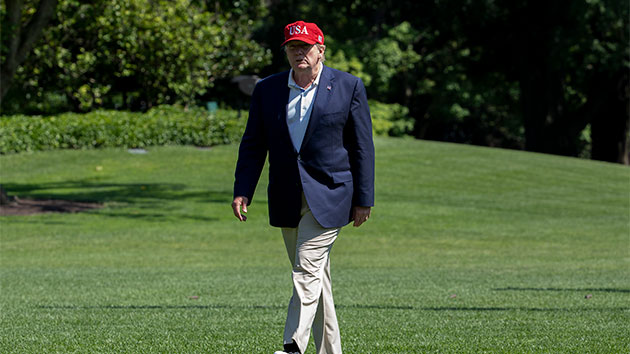 (WASHINGTON) —  President Trump is denying that he sexually assaulted advice columnist E. Jean Carroll in the mid-1990s, calling her claims false and motivated by attempts to sell her forthcoming book.

In a New York Magazine article posted Friday, Carroll accuses Trump of sexually assaulting her in a Bergdorf Goodman dressing room 23 years ago. The article features an excerpt from Carroll’s forthcoming book “What Do We Need Men For” which is set to be released July 2.

In response to Carroll’s allegations, the president issued a statement Friday evening vehemently denying her claims, and saying that he never even met Carroll. “She is trying to sell a new book — that should indicate her motivation. It should be sold in the fiction section. Shame on those who make up false stories of assault to try to get publicity for themselves, or sell a book, or carry out a political agenda.” Trump then called for any information that “the Democratic Party is working with Ms. Carroll or New York Magazine, please notify us as soon as possible.” President Trump also addressed Carroll’s allegations on the South Lawn on Saturday morning, calling New York Magazine a “failing publication” that no one reads anymore.

ABC News has obtained an advance copy of the book, in which Carroll, now 75, details the alleged assault in four pages, writing she ran into Trump at the revolving door entrance of the high-end department store’s entrance sometime during the fall of 1995 or spring of 1996. She claims he said to her “Hey, you’re that Advice Lady,” and then asked her advice on buying a present for “a girl.” She writes after he dismissed several of her suggestions, the two ended up in the lingerie department where Carroll claims he asked her to try on a see-through bodysuit. Inside the dressing room, Carroll alleges that Trump lunged at her, pushed her against the wall, placed his mouth on her lips, reached under her coat-dress and pulled down her tights.

In Carroll’s own words, she alleges: “The next moment, still wearing correct business attire, shirt, tie, suit jacket, overcoat, he opens the overcoat, unzips his pants, and, forcing his fingers around my private area, then thrusts his penis halfway — or completely, I’m not certain — inside me. It turns into a colossal struggle. I am too frightened to panic. I am wearing a pair of sturdy, black patent-leather, four-inch Barnes high heels. I try to stomp his foot. I try to push him off with my one free hand — for some reason I keep holding my purse with the other — and I finally get a knee up high enough to push him out and off, and I turn, open the door, and run out of the dressing room.”

Carroll said she never reported the incident to the police, but that she confided in two friends, contemporaneously. In her book, she described one friend as a journalist, a writer for New York and Vanity Fair magazines. The other friend was a “New York anchor-person.”

ABC News has tried reach out to Carroll’s friends but has been unable to do so since their names have been withheld from publication. Reached by cell phone Friday evening, Carroll told ABC News that the corroborating witnesses would be willing to speak to ABC News, on the condition that their names are withheld. ABC News has not yet received those names from Carroll despite multiple attempts to reach her, directly, and through her friends or her publisher.

New York Magazine, in the online article, included a photo provided by Carroll which shows Carroll, Donald and Ivana Trump, and Carroll’s then-husband, television news anchor John Johnson, attending an NBC party around 1987. ABC News reached out to Carroll’s ex-husband, Johnson, who has since retired from the industry. [Note: Johnson worked at Eyewitness News.] Johnson’s current wife said her husband has “no comment” on Carroll’s allegations against Donald Trump. Carroll was married once before, according to her previous writings, but ABC News has been unable to speak with her first husband.

On Friday evening, hours after the first excerpts from her book were posted by New York Magazine, Carroll gave an exclusive interview to MSNBC’s Lawrence O’Donnell. She told the cable news host that she believed the situation she describes at Bergdorf’s was her fault.

“I blame myself for that.” she told O’Donnell. “I said I am the stupidest woman who’s ever walked and did that for years and it took my ‘Ask E. Jean’ letter writers who would write into my column ‘Dear Jean’…And I would say over and over, ‘It’s not your fault. It’s not your fault. You’re not stupid. You’re doing right.’ You know? I was just saying this to all of these women for all of these years. And I never came forward and said, ‘I understand.’ And I still can’t kick that feeling that it was my fault. I can`t — it’s hard to get rid of that.”

During the interview, O’Donnell played the “Access Hollywood” tape for Carroll, in which Trump is heard bragging that “when you’re a star, they let you do it, you can do anything…grab them by the *****.”

“I was astounded,” Carroll responded. “I couldn’t believe it, and I still can’t…He’s a very powerful man. He takes what he wants. That`s the thing. And the American voters liked it because that was a referendum. Are they going to vote for a sexual harasser? Yes, they are, because his power is so great that it doesn’t matter. He can have whatever woman he wants, and going on.”

To date, more than a dozen women have publicly accused President Trump of sexual misconduct, all of which he denies.