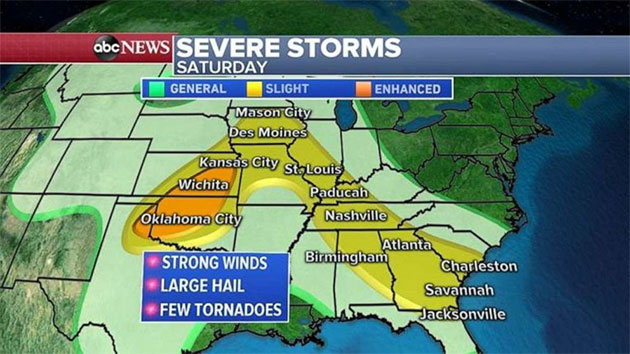 (NEW YORK) — There were 300 damaging storm reports from Colorado to South Carolina on Friday, with two deaths reported in severe storms as well.

There were over 140,000 people without power in Kentucky, Tennessee, Georgia and South Carolina on Saturday morning.

Unfortunately, more severe storms are expected for a huge part of the country from the Plains into the Southeast Saturday.

The biggest threat for tornadoes will be in the Plains from Oklahoma City to Wichita, Kansas, but an isolated tornado in the Southeast is possible.

More severe storms are expected Sunday in the Heartland — from Dallas to Oklahoma City to St. Louis — where damaging winds and hail are the biggest threat.

With all the severe storms, heavy rain is expected. Seven states, from Oklahoma to Kentucky, are under flood alerts Saturday.

Forecast models show up to half a foot of rain in Oklahoma, Texas and Arkansas and possible flash flooding over the next few days.