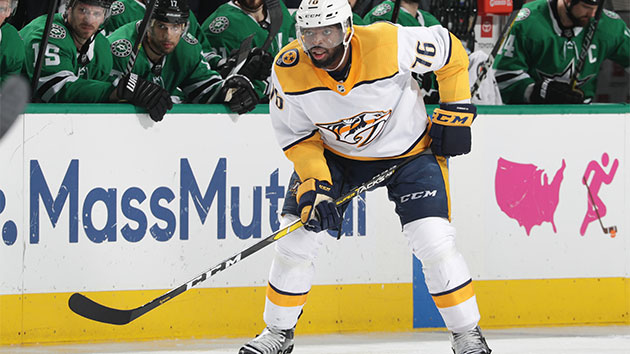 (NEW YORK) — The Nashville Predators have traded All-Star Defenseman P.K. Subban to the New Jersey for defenseman Steve Santini, defensive prospect Jeremy Davies, a 2019 second round pick and a 2020 second round pick, the teams announced.

Subban played for the Predators for the past three seasons after being traded from the Montreal Canadians in 2016.

The three time All-Star scored nine goals and assisted on 22 more in 63 games last season. In his career, the Canadian has 98 goals and 310 assists in 645 games.

“We appreciate P.K.’s contribution to the Predators and the Nashville community over the past three seasons, which have seen our organization have unprecedented success,” Predators general manager David Poile said in a statement. “He was an integral part of our run to the 2017 Stanley Cup Final, the 2018 Presidents’ Trophy and back-to-back Central Division titles. His work off the ice speaks for itself — he was an impactful member of our community, especially through the groundbreaking Blueline Buddies initiative.”

The 2013 Norris Trophy winner as the league’s best defenseman will join a team that has missed the playoffs seven of the past eight seasons.

The Devils picked center Jack Hughes with the number one pick in the NHL Draft on Friday.

New Jersey now has three number one overall picks on their team following the selection of Hughes. He joins Taylor Hall, the 2010 top pick, and Nico Hischier, the 2017 top pick.

Santini has played in 114 games over the past four seasons with New Jersey. He has tallied five goals and 21 points in his career.

Davies turned pro in April after playing three seasons at Northeastern University. He was a finalist for the Hobey Baker Award last season, given to the top college hockey player.