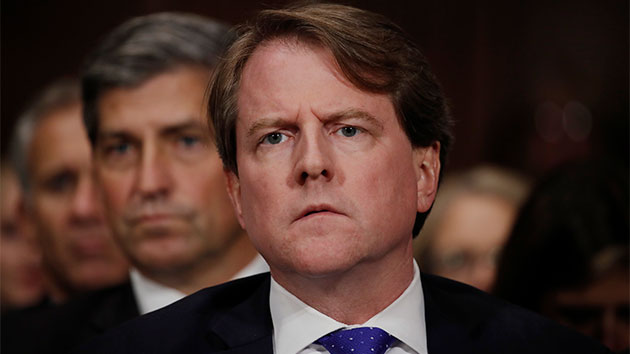 (WASHINGTON) — The former chief of staff to former White House counsel Don McGahn has struck a deal with the House Judiciary Committee that will allow her to submit answers in writing rather than appear for in-person questioning on Monday, her lawyer said.

The aide, Annie Donaldson, had been subpoenaed to appear before lawmakers on June 24, but she has agreed to instead submit written answers because she is pregnant and does not live in Washington, according to her attorney Sandra Moser. Donaldson agreed to appear in person on Capitol Hill after Nov. 1 if the committee considers it necessary, Moser said.

Donaldson, who was due to appear based on a subpoena, was one of the key fact witnesses for special counsel Robert Mueller’s investigation into Russia’s role in the 2016 campaign of President Trump. Her memos and notes became a central part of the Mueller report and, in particular, the report’s discussion of possible instances of obstruction of justice.

“We are pleased that an accommodation obviating the need for Ms. Donaldson to appear at this time has been successfully negotiated,” said Moser, who works for the firm Quinn Emanuel Urquhart & Sullivan.

A committee spokesman declined to comment, but the accommodation was confirmed by people familiar with the arrangement.

In an interview with ABC News’ George Stephanopoulos earlier this month, Trump said McGahn “may have been confused” when he told Mueller that Trump instructed him multiple times to have the acting attorney general remove the special counsel because of perceived conflicts of interest.

At the president’s instruction McGahn is currently fighting a subpoena from the House Judiciary Committee to testify publicly about those conversations with Trump, among other things. McGahn spent nearly 30 hours with the special counsel’s investigators testifying under oath and was one of most quoted aides to the president to appear in the report.