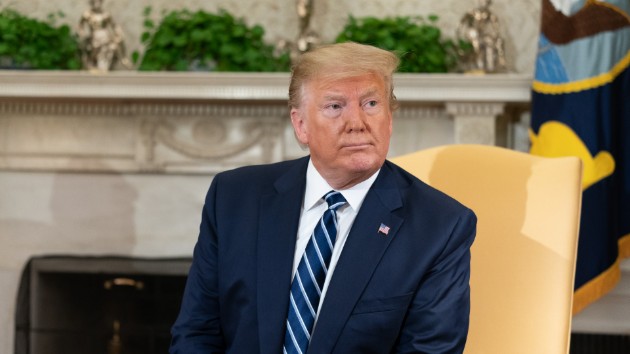 (WASHINGTON) — President Donald Trump on Friday reacted on Twitter to reports that he ordered a military strike on Iran for shooting down an American drone, but then reversed his decision after the plan was underway, saying he was concerned about potential casualties. In a series of tweets he said, “We were cocked & loaded to retaliate last night on 3 different sights when I asked, how many will die. 150 people, sir, was the answer from a General. 10 minutes before the strike I stopped it, not…. proportionate to shooting down an unmanned drone. I am in no hurry, our Military is rebuilt, new, and ready to go, by far the best in the world. Sanctions are biting & more added last night. Iran can NEVER have Nuclear Weapons, not against the USA, and not against the WORLD!”

….proportionate to shooting down an unmanned drone. I am in no hurry, our Military is rebuilt, new, and ready to go, by far the best in the world. Sanctions are biting & more added last night. Iran can NEVER have Nuclear Weapons, not against the USA, and not against the WORLD!

Sources told ABC News the reversal was against the advice of Secretary of State Mike Pompeo and National Security Adviser John Bolton.The plan and reversal was first reported by The New York Times. A senior level administration source briefed on the plan says it would have escalated the situation quickly had it been carried out. Officials feared the attack could have caused hundreds of civilian casualties.Iran shot down a U.S. drone early Thursday, claiming it had flown into the country’s airspace. The U.S. government claims it was operating in international airspace. Trump called Iran’s decision to shoot down the drone “loose and stupid” when speaking to the press following a discussion with Canadian Prime Minister Justin Trudeau. The comments came following a morning meeting with his top national security advisers over the downing of what the U.S. military said was an unarmed and unmanned U.S. RQ-4A Global Hawk drone flying over the Gulf of Oman near the Strait of Hormuz.Shortly before, Trump had tweeted that “Iran made a very big mistake” after a top Iranian commander warned Iran was “ready for war.” Top politicians from the Senate and House, including House Speaker Nancy Pelosi and Senate Minority Leader Chuck Schumer, met with administration officials over the downed drone Thursday afternoon. “The president may not intend to go to war here, but we’re worried that he and the administration may bumble into a war,” Schumer said.Pelosi called it a “dangerous situation” and cautioned the president that the U.S. “cannot be reckless in what we do.” Gen. Hossein Salami, commander of Iran’s Islamic Revolutionary Guard Corps, offered a strongly worded threat to the U.S. after the drone was downed. “Shooting down the American spy drone had a clear, decisive, firm and accurate message,” he said, translated from Farsi. “The message is that the guardians of the borders of Islamic Iran will decisively respond to the violation of any stranger to this land. The only solution for the enemies is to respect the territorial integrity and national interests of Iran.”

Biden says he will replace the entire federal fleet with electric vehicles
What to know about the link between mental health and heart disease
Dale Moss says “there’s no one person to blame” for ending engagement with ‘Bachelorette’ star Clare Crawley
Biden’s 1st 100 days live updates: Senators to be sworn in for Trump impeachment trial
Coronavirus live updates: Biden is a ‘game-changer,’ New Jersey governor says
Teen speaks out after alerting FBI about father’s alleged role in US Capitol siege