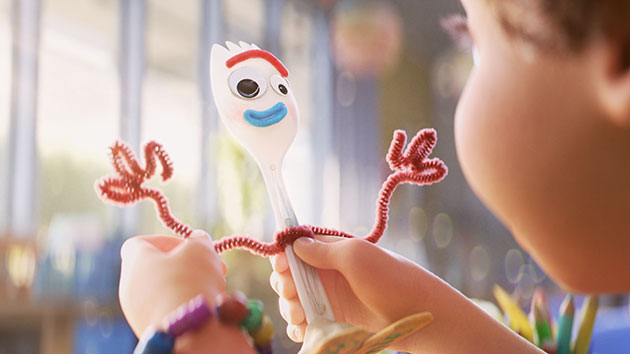 (NEW YORK) — The almost 10-year wait is over — Disney/Pixar’s Toy Story 4 is officially in theaters this weekend, and one of the new characters getting the most attention is a spork named Forky, voiced by Tony Hale.

Hale tells ABC Radio that Forky is having an existential crisis in the film, because he doesn’t think of himself as a toy.

“He’s like, listen, I was given this name, I made a toy. I don’t know what’s happening,” explains Hale. I’m a spork and I was made for chili, and that’s it. And you go to the trash.”

The film settles that issue, as well as another burning question: Why is his name Forky, and not Sporky?

“There’s actually another character that’s like, ‘But he’s a spork.’ So it’s definitely acknowledged,” assures Hale.

The Veep actor appreciates all the love, but he thinks he and Toy Story 4’s other voice actors are just a “small piece of the pie.”

“All the artists and directors and animators that put in so many hours of work in this — that’s the piece of the pie that should get the attention because they’re the ones that have created the story and the vision,” he says.

Adds Hale, “I mean, it’s like eye candy, this movie is so visually stunning. So they’re the ones that are really responsible for all that.”

So what was Hale’s favorite toy/character growing up?

“Scooter from The Muppet Show,” says Hale. “He was a nerd like me. He had glasses like me and I was convinced he had asthma like me.”