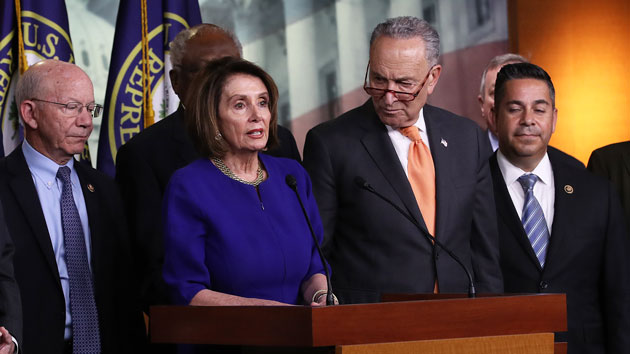 (WASHINGTON) — The top two Democrats in Congress, House Speaker Nancy Pelosi and Senate Minority Leader Chuck Schumer, said Friday they were not informed by the White House of President Donald Trump’s plan to stage a military operation against Iran in retaliation for shooting down a U.S. drone.“I did not receive any heads up that there was a strike that was in the works,” Pelosi told reporters. “Maybe the other leaders did on the Republican side, but I did not receive any of that.”And that would be a departure,” she added. “The president has informed us, for example in Syria, before we went there.”Pelosi said that during Thursday’s White House Situation Room briefing for a select few members of Congress, there was bipartisan agreement that the president should de-escalate the situation with Iran.“We left with the idea that the president was going to consider some options,” Pelosi said.She said that she hasn’t spoken to Trump on Friday, but she’s glad he didn’t go through with the strike.“I don’t know how imminent the strike was, we hear different things, but a strike of that amount of collateral damage would be very provocative and I’m glad the president did not take that,” she said.“De-escalate, de-escalate, de-escalate,” she said. Take a deep breath and de-escalate.”While the president tweeted Friday that he stopped a U.S. military response “10 minutes before the strike,” congressional leaders who met with Trump in the White House Situation Room Thursday said that a military response was not discussed in the classified meeting and that Democrats made clear any military action needed congressional approval.Indiana Republican Rep. Greg Pence, the brother of Vice President Mike Pence, told ABC News that he has “confidence” in the Trump administration “to do the right thing” as it mulls a response to Iran shooting down a U.S. military drone this week.“I have confidence in the administration, the State Department, the military to do the right thing on behalf of the American people,” Pence said, refusing to elaborate on his position.Across the aisle, Georgia Democratic Rep. Hank Johnson said he was concerned by reports that the president scuttled a military operation after learning the toll of civilian casualties.“The consequences if he had followed through would have been quite grave for the nation,” Johnson said. “The president is not acting carefully at this time. He has many of us very concerned about the direction of our country at this crucial time.”House Armed Services Chairman Adam Smith, who attended the classified briefing in the White House Situation Room Thursday, criticized Trump for sharing details of the aborted plans on Twitter.“That’s not the kind of thing that I think the president should say in public,” Smith, D-Wash., said. “He should not be saying stuff like that publicly because it gives the impression of a level of indecision.”“I wish he was more discreet about what he shared with everybody,” he added.Johnson said Trump should be consulting with congressional leadership.“The president appears to be making decisions by the seat of his pants – impulsively,” he said. “Perhaps there is some logic that he understands in his madness but it’s driving the American people crazy and it’s presenting real concerns about whether or not a fire would be lit.”Johnson blamed Trump for an “uptick in aggression” in the Middle East, adding the president “should be acting very carefully not to cause the unthinkable to happen.”“Our nation is not leading. Our nation is being led by other nations and our leader is not a thoughtful individual, has not carefully studied the geopolitical situation in which he has stuck his heavy thumb,” Johnson said. “It’s like a bull in the china shop. A blind bull in the china shop at that.”

Biden challenges UN to act together on pandemic, climate change
Line 3 pipeline resistance continues as activists ask Biden admin to shutdown project
Britney Spears makes triumphant return to Instagram, but some fans think someone else is running the account
Second dose of J&J COVID-19 vaccine results in stronger protection, company says
Biden to focus on ‘intensive diplomacy’ at UN amid tensions with allies
Republicans dig in on debt-limit standoff despite Democratic effort to mount pressure