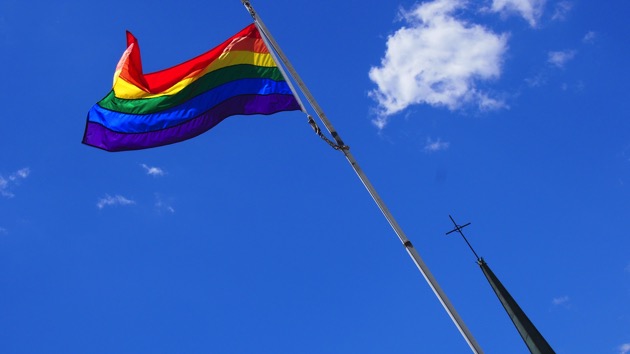 (INDIANAPOLIS) — A religious school in Indiana broke with the archdiocese after refusing to fire a teacher who was in a same-sex marriage.Brebeuf Jesuit Preparatory School announced in a statement Thursday that they had a “sincere and significant disagreement” with the Archdiocese of Indianapolis over the issue.”Brebeuf Jesuit has respectfully declined the Archdiocese’s insistence and directive that we dismiss a highly capable and qualified teacher due to the teacher being a spouse within a civilly-recognized same-sex marriage,” the letter from the school states. The teacher’s name and gender were not identified.The regional Jesuit community appears to be supporting the decision, with Brian Paulson, the leader of the Jesuits Midwest Province, writing a letter about the “disappointing development” posted to the group’s website.Paulson noted that the teacher’s same-sex union has been known within the community since the summer of 2017 when “this act became publicly known via social media.”The Archdiocese of Indianapolis, Paulson wrote, “requested verbally two years ago that Brebeuf Jesuit not renew this teacher’s contract because this teacher’s marital status does not conform to church doctrine.”The disagreement appears to have now come to a head as the archdiocese is expected to formally withdraw support from the school.Brebeuf Jesuit Preparatory School was founded in 1962 as an independent Catholic school and has “enjoyed a collaborative partnership with the Archdiocese for nearly 57 years,” the school’s letter states. It noted that the school always had control of the school’s governance, which included staff hiring and firings.Paulson wrote that on Thursday, the Jesuits received an advanced copy of a canonical decree set to be published Friday that states that the Archdiocese will no longer recognize Brebeuf Jesuit Preparatory School as a Catholic school.The Midwest Jesuits will be appealing the decision, Paulson wrote.”This is an issue that cuts to the very heart of what it means to be a Jesuit institution with responsibilities to both the local and universal church, as well as for the pastoral care we extend to all members of our Catholic community,” Paulson wrote.A statement from the archdiocese published by local station WISHTV said, “All those who minister in Catholic educational institutions carry out an important ministry in communicating the fullness of Catholic teaching to students both by word and action inside and outside the classroom. It is their duty and privilege to ensure that students receive instruction in Catholic doctrine and practice.”ABC News was not able to reach the archdiocese, whose office is closed on Fridays.”To effectively bear witness to Christ, whether they teach religion or not, all ministers in their professional and private lives must convey and be supportive of Catholic Church teaching,” the statement added.The statement goes on to say, per WISHTV, that “regrettably” the school does not subscribe to the belief that all teachers must be seen as ministers of the church and “be supportive of all teachings of the Catholic Church.”The issue has drawn national attention, and the school is getting support from one of the best-known Jesuits, James Martin, a Jesuit priest and outspoken supporter of greater inclusion within the Catholic Church.Martin, who regularly speaks publicly about the church, tweeted that he supports “my brother Jesuits who stand with our LGBT colleagues and stand against the relentless targeting of LGBT people.””Other employees do not conform to, or agree with, church teaching: straight couples living together before marriage, practicing birth control, etc…..as well as employees who are not Catholic, not Christian, or not believers. Yet they are not targeted. The targeting of LGBT employees must cease, and Brebeuf and the Midwest Province are here standing with the marginalized. This is the most Catholic thing that they could do,” he wrote in two tweets.Copyright © 2019, ABC Radio. All rights reserved.