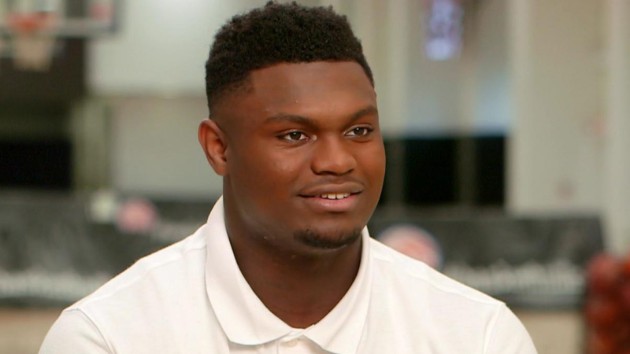 (NEW YORK) — When Zion Williamson was selected as the number one pick in the NBA draft, there was one person he knew deserved all the credit — his beloved mother.The 6-foot, 7-inch, 285 pound former Duke University superstar was taken by the New Orleans Pelicans Thursday night.But the 18-year-old knew he wouldn’t have achieved his b-ball dreams without his mom, Sharonda. The doting mom “put her dreams aside for me,” he told ABC News.”My mom sacrificed a lot for me. I wouldn’t be here without my mom,” Williamson added. “She did everything for me. I just want to thank her.”And his mom couldn’t be prouder.”He’s worked since [he was] 5 for this moment,” she said. “To watch his hard work pay off…to watch this, we’re so happy for him. We’re so happy.””Good Morning America” co-anchor Robin Roberts sat with Williamson earlier this week. The topics ranged from basketball to first-name fame — LeBron, Shaq and Zion have all been number one picks — to, of course, his mom.She was the toughest coach Williamson ever had, the superstar said.”We’d be in the car ride home after my middle school games and my stepdad would be like, ‘Yeah, that was a great game."””My mom would be like, ‘Good game?"” he continued. “‘You missed a pass there. You didn’t shoot it here."””Her being my biggest critic was the best thing for me, actually,” Williamson said.And now comes the hard part for Williamson — playing in the NBA against the world’s best basketball players. But it’s a challenge he’s “dreamed” about since he was a child.”For it to actually happen,” he said, tears streaming down his face, “I just thank God for it.”Copyright © 2019, ABC Radio. All rights reserved.