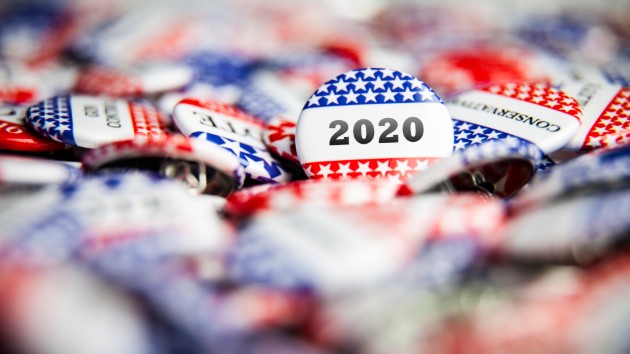 (MIAMI) — When eight Democratic presidential candidates descend on Miami for a forum focused on Latino issues on Friday morning, their appearance will highlight the early importance of one of the most vital swing states and the need to make inroads with Hispanic voters — a group set to become the largest minority voting bloc this election cycle. South Bend, Indiana, Mayor Pete Buttigieg, former Secretary of Housing and Urban Development Julián Castro, former Colorado Gov. John Hickenlooper, Minnesota Sen. Amy Klobuchar, former Texas Rep. Beto O’Rourke, Vermont Sen. Bernie Sanders, California Rep. Eric Swalwell and Massachusetts Sen. Elizabeth Warren all are scheduled to take the stage at the Telemundo Center at the National Association of Latino Elected and Appointed Officials presidential candidate forum. The event takes place just days before 20 of the 23 major Democratic candidates meet for the first two-night debate of the 2020 presidential election season. Democrats aren’t the only ones with a giant stake in the Sunshine State.Just this week, President Donald Trump officially launched his 2020 reelection campaign in Orlando, Florida, holding his event in a state he frequently calls his second home. Next week the Trump campaign is expected to roll out a national “Latinos for Trump” effort in Miami headlined by Vice President Mike Pence alongside Florida Lt. Gov. Jeannette Nunez, who’s Cuban American.The plan is part of the campaign’s larger strategy to reach out to Hispanic voters, particularly on television, with Trump sitting down for an interview this week with Telemundo anchor José Diaz-Balart in the president’s first interview with a Spanish-language network.During the interview set to air Thursday night, Trump told Diaz-Balart that Latino voters want him to follow through on his threat to deport millions of undocumented immigrants.”They want me to do it — they’re here illegally. They don’t want to lose their jobs, they want to keep their salaries, their wages, up,” Trump said. “And they don’t want crime. When people come through, you have MS-13 coming through.”Why Florida?Florida is no stranger to extremely close races and post-election day drama. Since the 2000 Bush vs. Gore hanging-chads saga, the last two presidential elections have been decided by approximately 1 percentage point — Barack Obama won Florida in 2012 by less than 1 percent, and Donald Trump won the state in 2016 by 1.2 percent.Most recently, two Trump-backed candidates faced some recount drama of their own following a contentious 2018 midterm election.Following two weeks of machine and manual recounts, allegations of voter fraud and uncounted ballots, former Republican Rep. Ron DeSantis narrowly won the state’s gubernatorial race, by 32,463 votes. Meanwhile, then-Gov. Rick Scott won a Senate race by just 10,033 votes. Both candidates had some of the president’s biggest midterm endorsements, with the fate of the 2020 presidential election potentially hanging on the results of their own races.

By the numbersAccording to 2018 midterm election exit polls, 15 percent of Florida voters identified themselves as Hispanic or Latino, and the group favored Democrats by about 10 points in statewide races — Democrat Bill Nelson outpaced Republican Rick Scott 54 percent to 45 percent in the Senate race, and Democrat Andrew Gillum led Republican Ron DeSantis 54 percent to 44 percent.The percentage of Hispanics and Latinos as a proportion of the total 2016 Florida electorate was 18 percent, and there was a strong preference for Hillary Clinton, who outperformed Trump within the group 62 percent to 35 percent. But Trump’s relatively poor performance among the Hispanic/Latino population statewide was fairly isolated, as Republican Sen. Marco Rubio received support from 48 percent of the bloc, nearly matching Democratic challenger Patrick Murphy.In 2018, 39 percent of Hispanic/Latino exit poll respondents said they considered themselves Democrats, compared to 35 percent who said they were Republicans. As a whole, the group skews middle-right of the political spectrum, with 42 percent considering themselves moderate “on most political matters,” 32 percent saying they’re conservative and 26 percent claiming to be liberal. Nearly one-third of the group said it was their first time voting in a midterm, potentially a sign of a boom in Latinos reaching voting age or more of them being interested in politics — or both.Despite frequent outreach to the community by candidates on the topic of immigration, Hispanic and Latino exit poll respondents in 2018 showed less interest in the issue than white voters, with 24 percent of Hispanics and Latinos noting that immigration was the most important issue facing the country, compared to 35 percent of their white counterparts.Further, 54 percent of Florida’s Hispanics and Latinos said Trump’s immigration policies were “too tough,” compared to 18 percent who said they weren’t tough enough and 26 percent who felt they were “about right.”

Opportunity for CastroThis will be only the second time Democratic presidential candidates gather to discuss issues specific to the Latino community and the largest gathering of its kind so far.Last month, four presidential candidates participated in the Unity & Freedom presidential forum focused on immigration in Pasadena, California. While the forum mainly focused on issues facing the undocumented immigrant community, Friday’s forum in Miami will offer candidates a platform to speak on a plethora of issues affecting the Latino community.The NALEO forum and next week’s debate present a particularly unique opportunity for Castro, the field’s lone Latino candidate, who, in polls, has sat in the middle of the crowded group for much of the year, despite his early entrance into the race and diverse resume.Castro has made no secret of his identity while on the trail, speaking with regularity of his grandmother’s immigration to the U.S. from Mexico and making immigration reform one of the first issues of the focus of his campaign. His brother Rep. Joaquin Castro, D-Texas, sits on NALEO’s board of directors.But, just as African American candidates Sens. Cory Booker, D-N.J., and Kamala Harris, D-Calif., have campaigned diligently in South Carolina, making no assumptions that the black voters who make up 60 percent of the early-voting state’s Democratic registrants would automatically gravitate towards a figure with a shared identity, so, too, the former HUD secretary isn’t taking for granted support from Latinos — particularly in Florida, where the population is highly diverse, hailing from a wide variety of Spanish-speaking nations in South and Central America and across the Caribbean.”The worst thing Julian Castro can say is, ‘I have the Latino vote in the bag because of my last name and because I was mayor of San Antonio,"” Arturo Vargas, NALEO’s CEO told The Intercept last year. “The only way that materializes is if there is significant investment in Latino voter turnout in [states with large Latino populations].” Copyright © 2019, ABC Radio. All rights reserved.