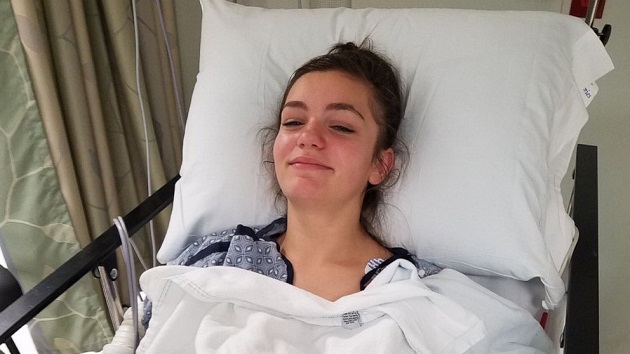 (NEW YORK) — Hanging out and taking selfies on the beach is hardly an unusual pastime for a 13-year-old girl. But Megan Pagnini never expected a day at the shore to turn into the nightmare of being attacked by a sea lion.The teen was in Pismo Beach, California, along the state’s central coast, last Friday evening when her and a friend walked down to the water after dinner.”I was at the water, I was just playing around, jumping — having fun,” Pagnini told ABC News’ Good Morning America in an interview airing Friday. “And I was taking silly pictures, when all of a sudden, it came out of nowhere and bit my leg.”The “it” she was referring to was a very angry sea lion.The animals are common in the region, and Pagnini said she thought nothing of the animals swimming in the area.”I thought they were just so cute and little and mostly just like little like beans that were just swimming around being cute,” she said. “I thought they were just the most adorable little things. They’re just the puppies of the sea.””And now I think they’re really scary. I don’t want to get near one or see one ever again,” she added.In video her friend was filming at the time of the attack, Pagnini is seen playing in the shallow water when she suddenly shouts and grabs her leg.”I just thought to just scream and try to get help because I didn’t even know what was happening,” she said. “My brain couldn’t really process it.”Pagnini suffered a deep gash to her leg and was rushed to the emergency room. They kept the wound dressed with bandages, while dead tissue was removed Thursday and the wound was finally stitched up, she said.”It’s very unusual to have a sea lion attack on a human,” Todd Tognazzini, patrol captain for the California Department of Fish and Wildlife, told ABC News. “There are many thousands of surfers that use the water every day in California; there are many people who go into the water and this type of event is extremely unusual.”Tognazzini said the animal tested positive for domoic acid poisoning. Domoic acid is produced by algae and accumulates in the shellfish and small fishes consumed by sea lions. It can cause neurological damage, and the strange behavior seen in the sea lion that attacked Pagnini, he said.”We knew that the girl had been transported to the hospital, so our concern was whether the animal was gonna cause harm to someone else,” Tognazzini said. “Our officer spotted what he believed to be the correct animal, it was behaving very strange, it actually exited the water and was in a state of stupor. It was biting sticks along the beach and actually worked its way up to a lifeguard tower on the beach, and it’s metal, and it bit the base of the lifeguard tower.”He called the attack “a complete anomoly,” and said, “There was nothing this young lady could have done to stop this from happening.”

Coronavirus live updates: California calls for pausing use of Moderna vaccine lot
Liv Tyler describes her “terrifying” battle with COVID-19
Damaging winds expected in California, heavy snow for the Rockies and Eastern Great Lakes
PepsiCo announces plan to reduce emissions more than 40% by 2030
‘Saved by the Bell’ star Dustin Diamond has Stage 4 cancer
Nation’s capital being turned into ‘fortress Washington’ ahead of inauguration