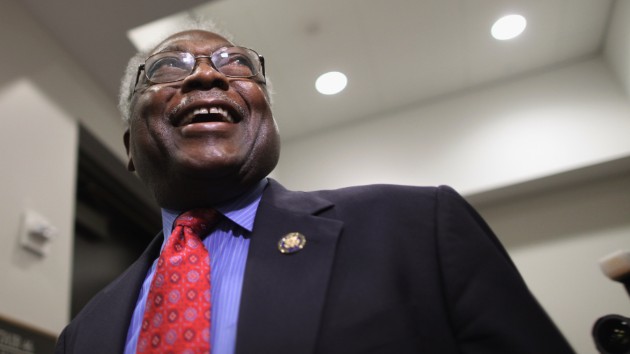 (COLUMBIA, S.C.) — Take 22 Democratic presidential candidates, add thousands of voters and mix in thousands of pieces of fish and slices of bread and you get a recipe for Majority Whip Jim Clyburn’s annual “World Famous Fish Fry” — a must-attend event for politicos hoping to win in South Carolina. “They’re going to be the people who are going to drive their grandma to the polls in February. They’re going to be the people who put a sign in their yard,” Amanda Loveday, former executive director of the South Carolina Democratic Party, said of fish fry attendees Friday night in South Carolina’s capital, Columbia. “These are going to be the core voters of the Democratic Party, and this is the weekend that they get to meet and shake hands with the potential next president of the United States.”Since its inception, the fish fry, which is free and open to the public, has been an effort to give South Carolinians a glimpse at candidates without the cost of attending the South Carolina Democratic Party Convention’s Blue Palmetto Dinner. Tickets to the sold-out dinner cost $150.At the fish fry, each candidate is introduced to the crowd with a pre-selected song of their choosing and addresses the thousands expected to attend. The gathering is expected to run through 4,400 pounds of fish and 6,400 slices of bread.”Everybody will be there just simply having good old time,” said Jaime Harrison, a former chair of the South Carolina Democratic Party and current U.S. Senate candidate. “Eating, drinking, dancing, laughing and then sitting back and listening to our presidential candidates.”The fish fry isn’t only about making a good impression on voters, it’s also about forming key relationships with the Democratic establishment in South Carolina.Clyburn, the third-highest-ranking Democrat in the House of Representatives, has hosted the fish fry for nearly three decades. He’s considered the most influential leader in South Carolina politics and his endorsement is highly coveted.Though Clyburn has promised to refrain from endorsing a candidate ahead of the state’s Democratic primary in February, in 2016, Clyburn endorsed former Secretary of State Hillary Clinton after saying he would stay neutral. He didn’t publicly endorse a candidate during the 2008 Democratic primary.”I mean, if you believe the polls, the majority of people are going to be there supporting Joe Biden, but that doesn’t mean that the other 21 candidates shouldn’t come,” said Loveday, who also served as Clyburn’s communications director. “That’s the reason why Jim Clyburn doesn’t endorse anybody until right before the primary date. He wants all the candidates to come and let folks across the state understand why they’re running.”However, former Vice President Joe Biden is hoping his long friendship with Clyburn and the relationships built in South Carolina will prove vital in the campaign’s South Carolina strategy. Biden’s South Carolina relationships helped make him an attractive running mate to then-Illinois Sen. Barack Obama in 2008.”Vice President Biden has the inside track because of his name I.D., because of his established relationships with the state,” Harrison said. “Many of these presidential candidates are new to South Carolinians and to the South Carolina Democrats.”Still, other 2020 presidential hopefuls are hoping to make inroads in South Carolina — a state where African-Americans make up nearly 30 percent of the population.Both Sen. Cory Booker and Sen. Kamala Harris have campaigned heavily in the state, venturing out of the two large metropolitan areas, Charleston and Columbia. While others, like South Bend, Indiana, Mayor Pete Buttigieg, have struggled to garner much African American support at events in the state.Harrison recommends that candidates shore up their South Carolina teams with staffers that have strong ties in the state. He says doing outreach in some of the most rural corners of South Carolina is critical.”Speak with Democrats that not only live in urban areas, where most of the state’s population is, but also in many of the rural communities which will probably be very influential in determining who ultimately wins the primary,” Harrison said.Copyright © 2019, ABC Radio. All rights reserved.