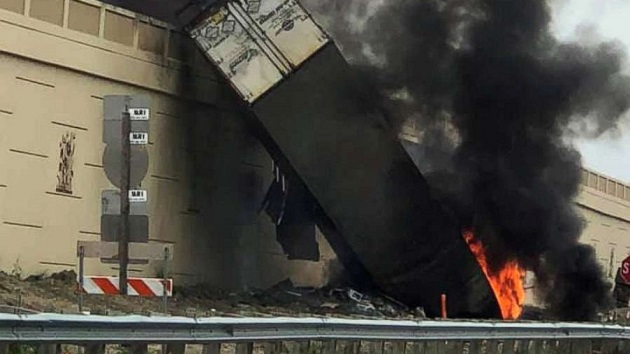 (RACINE, Wis.) — At least two have died in a fiery crash in Racine, Wisconsin, that involved two tractor trailers and two cars.At 11 a.m. on Wednesday, the Racine County Sheriff’s office responded to multiple calls on Interstate 94 after reports of fire and explosions. Racine County Sheriff Christopher Schmaling said a semi-tractor trailer was traveling south on I-94 near 50th Road when that driver made a lane change and hit a construction barrier.The driver then over-corrected, hitting the concrete median wall separating the north and southbound traffic lanes.The truck pushed the median into the northbound lane, causing three passenger vehicles to crash into one another, into the barrier and the wall.Another semi-tractor trailer made an evasive maneuver, turning east, going off the road and bursting into flames.Schmaling noted the reports of explosions may have been caused by the tires heating up and exploding.Both trucks were in flames and both drivers died in the crash, officials said. Their names were not released.Schmaling said the second truck driver “undoubtedly” saved others’ lives by his evasive maneuver and called him a “hero.”In the passenger vehicles, one person walked away with no injuries. Two others were immediately treated and transported to nearby hospitals with serious injuries, police said.Earlier, the medical examiner for Racine County, Michael Payne, said those injured were in critical condition with burn and fracture injuries.I-94 has been under “extreme construction,” Schmaling said. He asked that drivers “slow down, pay attention, allow enough distance to stop.”Schmaling said it is “the worst accident I’ve ever been a part of” in his 24 years on the force.Copyright © 2019, ABC Radio. All rights reserved.