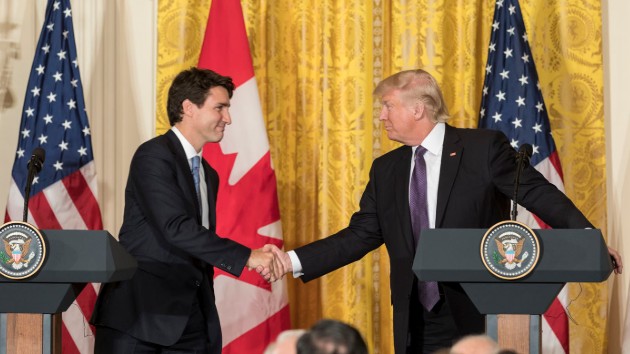 (WASHINGTON) — President Donald Trump is set to welcome Canadian Prime Minister Justin Trudeau to the White House on Thursday as the two leaders push for approval of a renegotiated trade agreement between the U.S., Canada and Mexico. The revised NAFTA trade agreement, now known as the United States-Mexico-Canada Agreement, has been renegotiated between the three governments but still requires ratification by the U.S. and Canadian legislatures. Mexico’s Senate moved to ratify the agreement on Wednesday. Trudeau’s visit also comes four months before he faces reelection, and he is looking to send a message to the voters back home that he can work with the U.S. president and move beyond their previous disputes, Canada expert Christopher Sands said.”Trudeau is trying to send the message that he’s got this, he’s working with Trump. He’s not holding a grudge himself. He’s not worried about being insulted. He’s just pushing all that aside saying, I can work with this government,” said Sands, a senior associate of the Americas Program at the Center for Strategic and International Studies.Trump and Trudeau have had an at-times rocky relationship, with the president departing last year’s G-7 Summit in Canada early and blasting Trudeau as “meek and mild.” The president’s insult, issued by tweet, came after Trudeau had called U.S. steel and aluminum tariffs “kind of insulting” and said Canada “will not be pushed around.”The U.S. has since dropped those tariffs, and now, Sands said, Trudeau’s aim is to demonstrate that the Canadian alliance with the United States is on solid footing, that he and Trump are strong partners, and that with the USMCA the two leaders have found a common cause.”Canadians expect their prime minister to suck it up and get along with the Americans,” Sands said. “They know the Americans are difficult, but they’re also important, and they know that somebody like Trump — I don’t think many Canadians think he’s warm and fuzzy — but they expect because the relationship is so important that prime ministers will find a way to get along.”He also noted that Trudeau has a particular interest in securing the full implementation of the USMCA because the effects of the uncertainty surrounding the pending agreement have been more deeply felt in Canada than in the U.S.”I think Canada particularly has felt the economic impact of uncertainty, with diminished investment by Canadians as businesses haven’t been sure what exactly to expect,” Sands said. “Also foreign direct investment has been down, and it’s slowing the Canadian economy, which hasn’t seen growth rates comparable to what the U.S. has seen, and I think that’s a concern for Trudeau.”After meeting with Trump at the White House on Thursday, Trudeau will also make a trip to Capitol Hill, where he’s expected to take part in meetings with House Speaker Nancy Pelosi and Senate Leader Mitch McConnell to make a direct pitch for the trade agreement and gauge the temperature of Congressional leaders on the chances for approval.In addition to making a public push for the ratification of the USMCA, Trudeau is expected to privately raise the issue of two Canadians being held by China on charges of spying. The arrests come after Canada’s arrest of the Huawei CFO on a U.S. warrant and are widely seen as an act of retaliation by China.When Trump and Trudeau bid adieu on Thursday, it will only be for a short while. The two are set to again cross paths at the G-20 economic summit in Osaka, Japan, at the end of next week. Copyright © 2019, ABC Radio. All rights reserved.