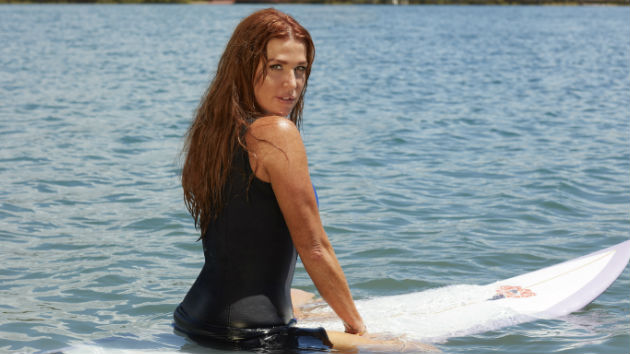 (LOS ANGELES) — Poppy Montgomery wants you to spend your summer in the “shadiest sunny place in the world.” That’s how she describes the setting for her new crime drama, Reef Break.

The series, shot in Montgomery’s native Australia, follows Cat Chambers, a surfer and a former criminal who becomes a fixer for the governor of an idyllic Pacific Island.

“It’s beautiful, it’s tropical, it’s wish fulfillment but it’s also got a dark side that our characters get to explore,” Montgomery says.

The actress, who also executive produces the show, hopes Reef Break will make some waves for female empowerment on TV.

“The show is really unique in that it centers around a female surfer, a female criminal,” she says. “It has a lot of strong women doing things that men usually get to do on TV.”

Poppy adds of her character, “She surfs. She drives boats. She jumps out of planes. I mean, she does everything the boys get to do and more.”

Larry King remembered by celebrities, politicians: ‘A newsman who interviewed the newsmakers’
Camp Cadet program canceled for 2021
“I was just trying to keep warm!” Bernie Sanders laughs on ‘Late Night’ about his meme-ready picture
Jane Krakowski loves ‘Dickinson”s spin on the poet
Olivia Jade returns to YouTube after over a year, “I can’t change the past”
How working from home due to COVID could be a double tax hit for some