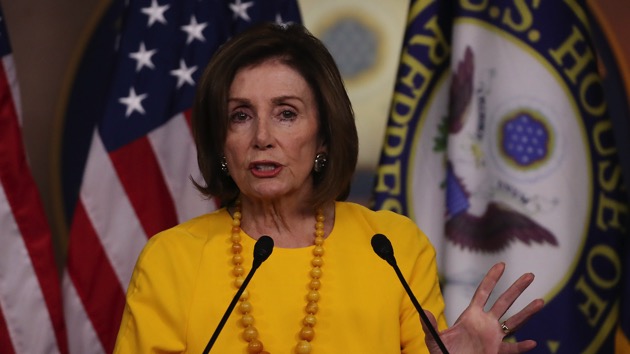 (WASHINGTON) — After Iran shot down an unarmed, unmanned U.S. drone Wednesday over international waters, House Speaker Nancy Pelosi says “there’s no appetite for going to war,” but Republicans warned that if President Trump does not respond with force, America’s adversaries will think the U.S. is “all talk.”“I think it’s a dangerous situation,” Pelosi, D-Calif., said during a news conference at the Capitol Thursday morning. “We have to be strong and strategic about how we protect our interests. We also cannot be reckless in what we do. So it would be interesting to see what they have to say, whether the – I don’t think the president wants to go to war. There’s no appetite for going to war in our country.”The top congressional leaders from both parties and chairmen and ranking members of the Intelligence, Foreign Affairs and Armed Services Committees – totaling more than 20 lawmakers – were invited to a closed-door, classified intelligence briefing from the administration at the Capitol late Thursday morning.The White House invited top members of Congress to another classified briefing with President Trump in the White House Situation Room at 3 p.m. Thursday to learn more about the administration’s position on Iran from Chairman of the Joint Chiefs of Staff Gen. Joseph Dunford, outgoing acting Secretary of Defense Patrick Shanahan and his replacement Mark Esper. The top four congressional leaders – Pelosi, House Minority Leader Kevin McCarthy, Senate Majority Leader Mitch McConnell and Senate Minority Leader Chuck Schumer, as well as the chairmen and ranking members of the House and Senate Armed Services and Intelligence committees, are all expected to attend.“There’s nobody who has any illusions about Iran, their bad behavior in terms of who they support in the region, their spreading of ballistic missiles – and we have sanctions on all of that,” Pelosi said prior to the briefing. “But this is a dangerous neighborhood and miscalculation on either side could provoke something that would be very bad in terms of the security and our interests.”Sen. Lindsey Graham, R-South Carolina, told reporters that Trump’s response to Iranian provocation “is truly a defining moment for him,” likening it to the moment when President Barack Obama drew a “red line” and vowed he would not let Syrian President Bashar al-Assad get away with using chemical weapons on Syrians in 2013. Graham predicted the president’s response will impact how adversaries around the world view the United States.”If they do anything else to an American asset and this president doesn’t respond like Ronald Reagan, then this is a signal to Iran,” Graham said. “We’re a lot closer today than we were yesterday and only God knows what tomorrow brings.””They are testing him. They need to do so at their own peril,” he added. “If they get away with this, God help us with North Korea and throughout the world. I’m convinced that as a last resort, President Trump will stop this behavior.”Earlier Thursday, Pelosi made clear she is not yet supporting a U.S. military response, but added, “let’s get the facts.”“Let’s make sure that we don’t have a beating the drum for something without the clarity of the facts involved,” she warned. “Our responsibility is to protect and defend our constitution, the American people, our country. That’s our first responsibility. That’s what we will honor.”Senate Majority Whip John Cornyn, the No. 2 ranked Republican in the upper chamber, warned that rhetoric encouraging military force was “reckless.””I don’t think Iran or the US wants a war,” Cornyn, R-Texas, said. “The United States needs to respond appropriately and I’m sure the president’s national security team is presenting him with a range of responses. If we do nothing, it just encourages Iran further and Iran has a long history of harassing and killing American. I think doing nothing would be a mistake.”Asked why tensions are rising between Iran and the United States, Pelosi pointed at the breakup of the Iran nuclear deal.“When we moved away from that, we lost some credibility with our allies,” she said. “However we go forward, we have to recognize that working together with our allies is very, very important and that we cannot throw our weight around.”Copyright © 2019, ABC Radio. All rights reserved.