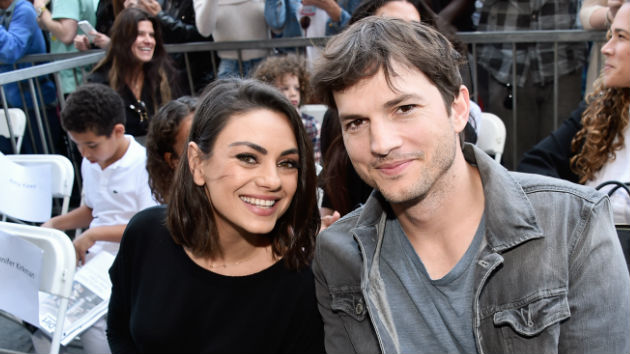 (LOS ANGELES) — Former That ’70s Show costars Ashton Kutcher and Mila Kunis have been married since July of 2015, and are still going strong…despite a new In Touch cover article declaring: “It’s Over.”

That was news to them, and Kunis sarcastically read the story’s cover to her hubby on Instagram.

“Babe: what’s happening?” Kutcher asks her, looking into the camera. “It’s over between us,” Kunis deadpans, holding up the article on her phone to the camera.

“It’s over between us?” Kutcher says, in mock concern.

“Yeah. I ‘felt suffocated,"” she says, quoting the magazine’s cover.

“You felt suffocated?!” Kutcher says. “Oh, I was just so overbearing!”

“And you had a very dark secret exposed,” his wife says.

“What was the dark secret?” he asks. When Kunis says she doesn’t know, Kutcher adds, “It must have been really dark.”

Captioning the video, Kutcher says, “I guess it’s over @intouchweekly” adding, “have fun selling magazines this week. Maybe next week my wife will be having twins. For the third time. But who’s counting.”

In reality, the couple has two children, Wyatt, four, and Dimitri, two.The hysterical video was immediately liked by the couple’s celebrity pals, some no stranger to similar tabloid rumors. “This is amazing,” Demi Lovato replied. “#fakenews,” noted Rumor Willis.

Vanessa Bryant remembers Kobe and Gianna on one-year anniversary of their deaths
What to know about the link between mental health and heart disease
Biden’s 1st 100 days live updates: Senators to be sworn in for Trump impeachment trial
Teen speaks out after alerting FBI about father’s alleged role in US Capitol siege
Storms continue to move across US bringing tornadoes, heavy snow, freezing rain and flooding
One dead after car strikes multiple pedestrians in Portland, Oregon