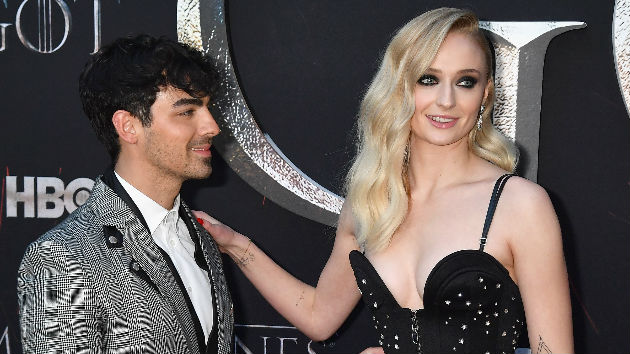 Photo by Jeff Kravitz/FilmMagic for HBO
Posted on June 20, 2019 by ABC News

In a new episode of the Hollywood Foreign Press Association’s The HFPA in Conversation podcast, the X-Men: Dark Phoenix actress says her dad was “beyond pleased” that she wed a musician.

She adds, “So yeah, my dad was beyond pleased when I married a musician because it was always kind of, ‘You have to marry a rugby player or a musician!’ So I got one of them right.”

Sophie and Joe tied the knot on May 1 in a surprise ceremony in Las Vegas following the Billboard Music Awards. They plan on having a more formal ceremony in France sometime this summer.

“I keep going from boyfriend, to fiancé, to husband, I can’t figure out what to say!” she says. “It’s early days but we’re very happy.”

Trump plans to leave in dramatic fashion yet continues to stay out of sight
Survey says 60% consider themselves “total film buffs” thanks to pandemic binge-watching
Coronavirus live updates: California calls for pausing use of Moderna vaccine lot
Liv Tyler describes her “terrifying” battle with COVID-19
“I’d be up for that!” Liam Neeson wants to re-join the ‘Star Wars’ universe with Disney+’s ‘Obi-Wan Kenobi’ show
‘WandaVision’ star Paul Bettany on his father’s struggle to come out of the closet