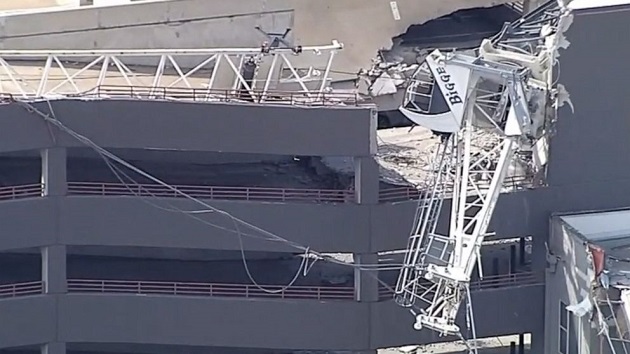 (DALLAS) — It was just like any other Sunday.Eric Ridenhour was making grilled cheese sandwiches while his fiancee, Kiersten Smith, sat on the couch behind him watching television in their Dallas apartment on the afternoon of June 9. “Everything kind of just went dark, like this,” Ridenhour, 29, told ABC News as he snapped his fingers. “I don’t remember hearing a sound.”Suddenly, a thunderstorm with near hurricane-force winds rolled through the area and toppled a construction crane onto their five-story apartment complex. The crane smashed through multiple floors of the Elan City Lights residential building, including theirs.”It happened so fast, and the first words out my mouth were my fiancee’s name,” Ridenhour said in an emotional interview set to air Thursday on Good Morning America.”I don’t know how many times I said her name,” he continued. “I screamed her name and I could not find her.”Their apartment ripped apart, Smith, 29, was found by firefighters and taken to the hospital, where she was pronounced dead.Ridenhour described his late fiancee as “a beautiful, caring person” whose humility and positive attitude empowered him.”She makes it hard to grieve,” he told ABC News. “When I look back on my memories, all I can do is smile. I guess that’s a blessing and a curse.”Ridenhour, a content creator for applications, and Smith, a human resources specialist who was recently promoted, were planning to get married in September.Ridenhour said he never wanted to get married, until he met Smith.”The moment I saw her at work on the elevator, I was infatuated,” he recalled. “We clicked.”The crane tore through many apartments and crushed an adjacent parking garage. Five other people were hospitalized for injuries, but all were expected to recover.”Time is really precious,” Ridenhour told ABC News. “In a split second, everything that you love can be gone.”The Occupational Safety and Health Administration, an agency of the U.S. Department of Labor, is investigating the deadly incident and will determine an exact cause.An OSHA official told ABC News that Bigge Crane and Rigging Co., which owns the collapsed crane, has been hit with 17 safety violations since 2013. That year, the California-based company was fined $56,700 for nine “serious” safety violations after a crane collapsed at a nuclear plant in Arkansas, killing a worker and injuring others. The company contested some of the violations and the fine was later reduced to $28,000 in a settlement.Bigge Crane and Rigging Co. said the collapsed crane in Dallas was not in service during the storm.”Bigge mobilized personnel to the site and is fully cooperating with the independent, third-party, investigating authority (OSHA) who have yet to determine the cause of this accident,” the company said in a statement June 10. “When authorized by OSHA, the tower crane will be removed and examined.”Smith’s family said in a statement that they have hired attorneys with the Cox Pradia Law Firm “as legal counsel to assist us as we seek justice in this matter.””We will get answers for the family,” one of the attorneys, Troy Pradia, told ABC News.Ridenhour said it will take accountability for them to heal from the tragedy.”I would do anything to have a moment with Kiersten, to tell her I love her,” he said. “I feel if someone is at fault, they need to be held accountable.”