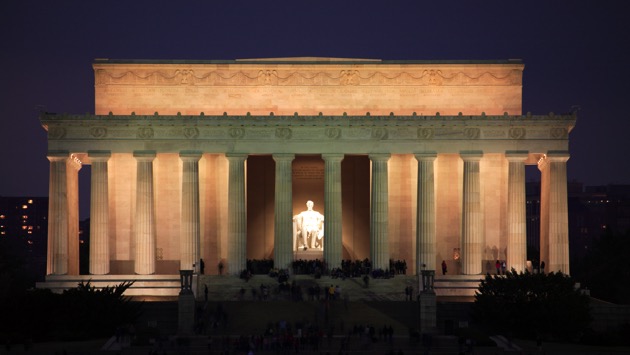 (WASHINGTON) — President Donald Trump, as he promised, will deliver a speech on the steps of the Lincoln Memorial this July Fourth as part of his desired “Salute to America” event, the administration announced on Wednesday.One of the two jets used as Air Force One will conduct a flyover of the National Mall as part of Trump’s celebration, a U.S. official confirmed to ABC News, a detail first reported by the Washington Post.The president first announced he wanted to hold a special July Fourth event at the Lincoln Memorial in a presidential tweet back in February, but Trump’s plan to commandeer part of the nonpartisan, annual festivities that take place each summer on the National Mall has faced pushback over the added security, logistical and financial obligations with hosting a presidential event.

HOLD THE DATE! We will be having one of the biggest gatherings in the history of Washington, D.C., on July 4th. It will be called “A Salute To America” and will be held at the Lincoln Memorial. Major fireworks display, entertainment and an address by your favorite President, me!

Trump’s speech is set to take place between 6:30 p.m. and 7:30 p.m. and that timing would not conflict with the PBS annual broadcast of “A Capital Fourth,” a concert with the National Symphony Orchestra, or the nationally-known fireworks display set to start at 9:07 p.m.“There is no more appropriate place to celebrate the anniversary of American independence than among the Nation’s monuments on the National Mall and the memorials to the service men and women who have defended the United States for the past 243 years,” said Interior Secretary David Bernhardt in a release announcing the plans to go forward with the president’s desired event, just about two weeks before it’s set to occur.In addition to a presidential address — “an address by our Commander-in-Chief” the release calls it — the Interior Department said the president’s “Salute to America” event will “honor each of the nation’s five service branches with music, military demonstrations, flyovers and much more.” Multiple military musical groups, including the Old Guard Fife and Drum Corps, the U.S. Army Band (“Pershing’s Own”), the Armed Forces Chorus, and the United States Marine Corps Silent Drill Team are set to perform.Despite months of extensive planning by Bernhardt and other members of the administration, sources had told ABC News it was unclear for a time whether the president would get his way on the event because of the unique concerns of securing the president at Lincoln Memorial and concerns about the disruption to the public attempting to access the mall to view the fireworks from nearby public transit.The administration has also ordered the launch location of the fireworks be moved from its regular launch location near the reflecting pool to a nearby park. Bernhardt touted that the administration’s revised plan as a way to open up parts of the National Mall to the public. The regular launch site forces the closure of the World War II Memorial and the reflecting pool for several days leading up to the July Fourth, but those areas will now remain open.It is highly unusual for a president to participate directly in the city’s annual celebrations, which already feature extensive additional security measures, including the construction a temporary security apparatus around parts of the National Mall.Washington, D.C., Mayor Muriel Bowser, a Democrat, has previously raised particular objections to the president’s plans, emphasizing the added strain on the city’s already stretched security operation in order to provide adequate security for the president, in addition to securing a new fireworks location.”If we have to put more police to cover his movements, more police for the fireworks and an additional location for police where the fireworks are going to get set off, that puts a strain on us,” Browser told the Washington Post in a recent interview. “We won’t allow it to impact neighborhood safety. So the chief will have to think about if he needs additional resources.”Contacted for comment Wednesday, the mayor’s office did not have an immediate comment in reaction to the administration’s announced plans for July Fourth. Copyright © 2019, ABC Radio. All rights reserved.