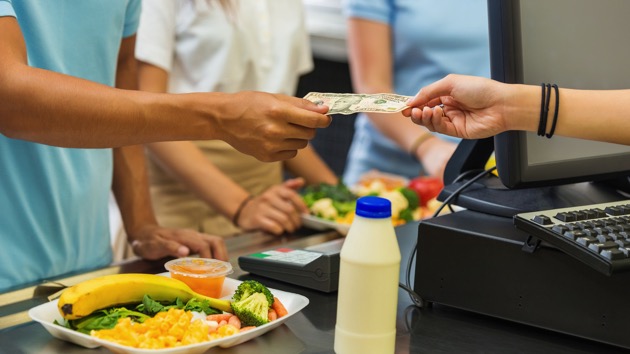 (WASHINGTON) — Following stories that gained national attention about students being publicly shamed for having school lunch debt, Minnesota Rep. Ilhan Omar said on Wednesday she wants to tackle the issue by introducing the No Shame Against Schools Act.“Hunger and debt are a national problem,” Omar said.Omar, who previously worked as a child nutrition outreach coordinator and a nutrition community outreach coordinator, announced her bill during a news conference which she said would prohibit any kind of identification like tokens or wristbands, publishing a list of children with outstanding debts, or using debt collectors to obtain school meal fees. It would also require schools to attempt to certify a child with unpaid meal fees and subsequently allow that school to receive retroactive reimbursement for that child’s meals for up to 90 days.“So, what this bill does is simple, it prohibits the punishment and shaming of children who are unable to pay school meal fees,” Omar, who has herself been a high-profile target of criticism, said.Omar was joined by fellow lawmakers New Mexico Democratic Reps. Ben Ray Lujan and Deb Haaland who voiced their support for this act.“The question on whether a child should eat should not be dependent on a family’s income,” Halaand said.More than 75 percent of school districts reported having unpaid student meal debt at the end of the 2016-2017 school year, according to a 2018 report by the School Nutrition Association, which surveyed 1,550 districts nationwide.The median amount of total debt was $2,500, but the amounts ranged from less than $10 to more than $865,000, according to the report.Valerie Castile, mother of student cafeteria supervisor Philando Castile who in 2016 was fatally shot by a police officer in Minnesota, also spoke at the press conference. She highlighted the importance of continuing the legacy of her son by donating $8,000 to a Minnesota high school to settle school lunch debts.“If we can give a tax cut to the rich, then we can make sure that students are fed at school and not shamed,” Castile said.The U.S. Department of Agriculture began requiring schools to implement policies to collect debt for unpaid meals at the start of the 2017-2018 school year. Although the USDA spends about $22 billion on child nutrition programs, it prohibits schools from allocating those funds to pay for the debt.Several states, including Pennsylvania, Washington, Oregon, Kansas and Colorado, have passed legislation preventing schools from shaming students who owe meal debt, which has caused many districts to struggle with escalating debt, according to SNA.Copyright © 2019, ABC Radio. All rights reserved.