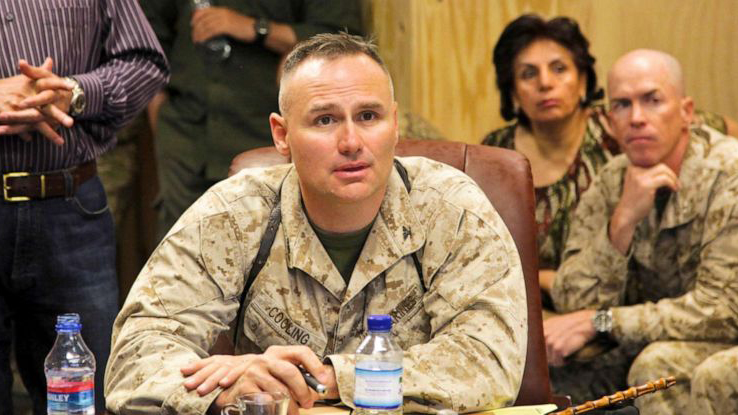 (WASHINGTON) — A Department of Defense Inspector General report concluded that a Marine Corps general “disparaged, bullied, and humiliated subordinates, devalued women, and created a negative … work environment that led to a general distrust of his impartiality and leadership.”In response, the Marine Corps said it would “take appropriate action in light of the substantiated misconduct.”Brig. Gen. Norman Cooling was serving as the Legislative Assistant to the Commandant of the Marine Corps when the Senate Armed Services Committee sent a complaint to then-Defense Secretary James Mattis about Cooling’s conduct, leading to the DOD IG investigation which was initiated on March 15, 2018.The IG concluded that Cooling violated sections of U.S. Code, as well as Defense Department and Navy regulations. He is currently serving as the Assistant Deputy Commandant for Plans, Policies and Operations for the Marine Corps, after being removed from his previous position last year due to the investigation.After reviewing the IG’s draft report, Cooling acknowledged that he “fell short of maintaining a positive climate throughout the Office of Legislative Affairs (OLA)” and accepted responsibility for that shortfall, but said the report did not provide “sufficient evidence by any legitimate legal standard to support a finding that I created a hostile work environment or that I made demeaning remarks about women,” according to the IG.”The Marine Corps takes all allegations of misconduct seriously, regardless of rank,” Marine Corps spokesman Maj. Brian Block told ABC News in a statement on Wednesday. “The Marine Corps is currently reviewing the DoD IG’s report and will take appropriate action in light of the substantiated misconduct.””The Marine Corps expects every Marine, uniformed and civilian — and particularly those in leadership positions — to hold themselves to the highest standards in their personal and professional conduct. When Marines fall short of our standards they are held accountable,” he said.The IG interviewed over three dozen witnesses and reviewed 11,650 official emails, along with other relevant documents before determining, according to the report, that “on numerous occasions … Cooling’s comments and conduct demeaned, bullied, and humiliated his subordinates.”The report says:

“BGen Cooling told a female [non commissioned officer] who aspires to be a Marine Corps pilot that he would rather have his daughter work in a brothel than be a pilot.”
“He loudly and publicly berated two staff members whom he accused of trying to ‘f**k’ him and asked them repeatedly, ‘Where the f**k have you been?"”
“He publicly yelled to a staff member that if the staff member did not give him requested budget information he would castrate the staff member.”
“In a staff meeting, he bullied a staff officer when he publicly berated, belittled, and singled her out for ridicule in front of her peers when a Member of Congress canceled a meeting with the Assistant Commandant. He then told his entire staff in the same meeting that if any of them failed to get an office call for the Assistant Commandant with a Member of Congress, he was ‘going to jump out this f**king window."”
“He bullied a subordinate when he attempted to damage her reputation by spreading a rumor about her and potentially damaging her future career by warning the most senior Marine Corps officer in the subordinate’s career field, ‘watch yourself, you’ve got to watch out’ for her. BGen Cooling further blamed the subordinate for the SASC complaint against him, his removal from the Legislative Assistant position, and this investigation into his conduct.”

Cooling further told the IG that the report “can only legitimately establish that I made a few isolated comments that some construed in the worst possible way and told third parties so that they ended up in the [SASC complaint].””At no time during that brief assignment, nor at any other time during my career, did I ever discriminate against anyone for anything other than their performance,” he said in the report.Cooling graduated from the U.S. Naval Academy in 1986 and has deployed multiple times to Iraq and Afghanistan throughout his military career.

Colorado attorney general opens grand jury investigation on death of Elijah McClain
Biden accuses Trump of ‘inciting’ Capitol attack, nominates Garland for attorney general
Biden expected to pick Merrick Garland as attorney general
New York man charged with hate crimes in series of attacks against women on subway
Record number of women sworn into Congress, including new ‘Squad’ member
Serena Williams on how she is inspired by the women in her life