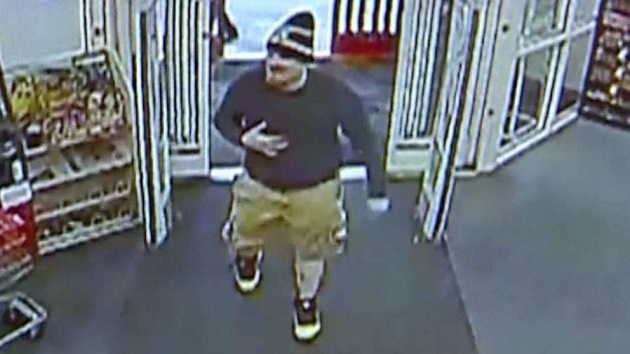 (MALDEN, Mass.) — Police in Massachusetts said they’re still searching for a man who faked a heart attack while his accomplice tried raiding a drugstore’s cash register.Jesse Meharg, 30, and Vyacheslav Phinney, 31, fled from a CVS in Malden after the caper on Sunday, with police locating and arresting Phinney on Tuesday, ABC Boston affiliate WCVB-TV reported.Meharg, who “faked a heart attack” to create a distraction while Phinney lept toward the register, remains at large, police told WCVB.The Malden Police Department released surveillance footage of the incident in which the men try to flee but are tripped by a bystander, sending wads of cash flying in the air.Meharg appears to be scrambling for fistfuls of bills before running off, leaving behind his knit cap.Malden police joked on Facebook that their continued pursuit of Meharg is not only to make sure he’s “held accountable” but to “make sure his ‘heart problems’ have been taken care of by a medical professional.”

Olivia Jade returns to YouTube after over a year, “I can’t change the past”
How to fix home appliances yourself before spending hundreds of dollars
How working from home due to COVID could be a double tax hit for some
Columbus to invest nearly $5M in police bodycams after Andre Hill shooting
New York man who traveled to DC with Proud Boys arrested
Chrissy Teigen says sobriety is “a different world for me”