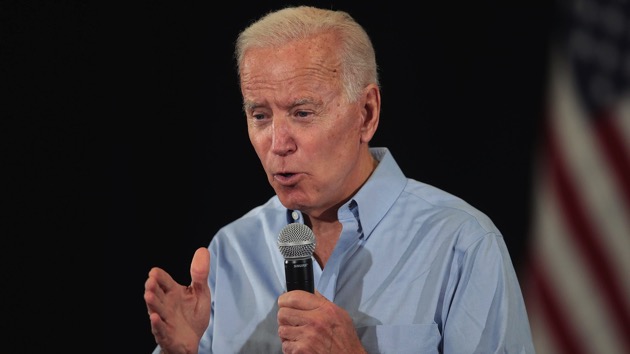 (NEW YORK) — Former Vice President Joe Biden is coming under fire for comments he made about finding consensus as he worked as a senator alongside Southern Democrats with opposing views including – those who supported segregation.“I know the new ‘New Left’ tells me that I’m – this is old-fashioned. Well, guess what? If we can’t reach a consensus in our system, what happens? It encourages and demands the abuse of power by a president. That’s what it does,” Biden said to the crowd of donors during an evening fundraiser in New York City Tuesday night, according to a press pool report, as he spoke talking about the need to fix our ‘broken’ political system.The former vice president then recalled his time in the Senate serving alongside former Senators James O. Eastland and Herman Talmadge. Eastland served as chair of the Senate Judiciary Committee when Biden arrived to the Senate, and both Eastland and Talmadge were deeply opposed to desegregation.“I was in a caucus with James O. Eastland,” Biden said, according to the pool report, briefly channeling the late Mississippi senator’s Southern drawl. Biden said of Eastland, “He never called me ‘boy’, he always called me ‘son.’”Biden then brought up a deceased Georgia senator, “a guy like Herman Talmadge, one of the meanest guys I ever knew, you go down the list of all these guys. Well, guess what? At least there was some civility. We got things done. We didn’t agree on much of anything. We got things done. We got it finished. But today, you look at the other side and you’re the enemy. Not the opposition, the enemy. We don’t talk to each other anymore,” the report continued.This was not the first time Biden spoke about his relationship with senators who supported segregation.“When I first got started, it was a very different circumstance. The politics wasn’t broken, but the American people were in overwhelming disagreement. On the war in Vietnam, the women’s movement, the civil rights movement are bitter, bitter fights. When I got there, there were still five, seven segregationists from the south were part of the Democratic Party…But the politics wasn’t broken in the sense that we still treat each other with some civility,” Biden said in Concord, New Hampshire earlier this month.Biden has also recalled Eastland’s offer to come and campaign for or against him in Delaware — whichever would help more in his re-election efforts, as he did in 2016.“I was running for reelection in 1978. And I walked into the Senate dining room when we were trying to wind down everything. We had no appointments, just voting around the clock, Biden said during a speech at the Pittsburgh Labor Day parade in 2016.“And I walked in – true story – and I got – old Eastland looked at me. He never called me Senator. He always called me ‘son.’ He says, ‘Son, come over here and sit down a minute.’ And I went over and sat down,” Biden recalled at the time. “He said, ‘What can old Jim Eastland do for you in Delaware?’…I said, ‘Mr. Chairman, some places you’d help and some places you’d hurt.’ “[Eastland] said, ‘Well, I’ll come to Delaware and campaign for you or again you, whichever will help the most.”While on the campaign trail Biden has often talked about the need for consensus in order to make the political system work, which often requires working together to accomplish goals, despite differences in beliefs.But some are criticizing Biden for speaking nostalgically about Senators whose views are antithetical to the party today, putting Biden out of step with the electorate.One of Biden’s 2020 competitors, New York City Mayor Bill de Blasio slammed Biden for his comments, tweeting that Eastland believed his interracial family should be illegal.“It’s 2019 & @JoeBiden is longing for the good old days of “civility” typified by James Eastland. Eastland thought my multiracial family should be illegal & that whites were entitled to “the pursuit of dead n*****s. It’s past time for apologies or evolution from @JoeBiden. He repeatedly demonstrates that he is out of step with the values of the modern Democratic Party,” de Blasio tweeted Wednesday.The Biden campaign declined to comment for this story.Copyright © 2019, ABC Radio. All rights reserved.