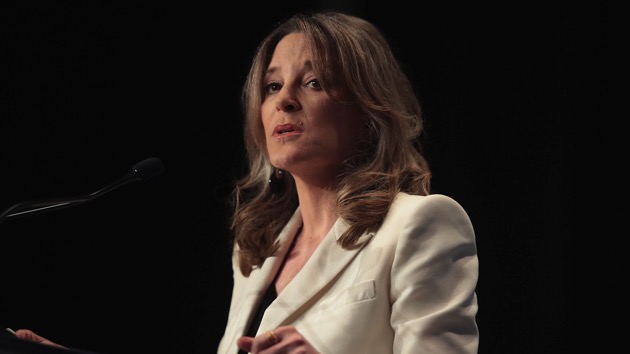 (WASHINGTON) — Ahead of Wednesday’s House Judiciary subcommittee hearing on reparations for the descendants of slaves, the first on the topic in over a decade, Democratic presidential candidate Marianne Williamson told ABC News’ ‘Start Here’ podcast that the policy is a necessary way for the country to atone for past actions.”One of the reasons why I propose reparations as opposed to just say race-based policies is because they carry with them an inherent mea culpa. It is an inherent acknowledgement of a wrong that has been done, of a debt that is owed, and a willingness to pay it,” Williamson, an author who is mounting a unique bid for the Democratic presidential nomination, said.Williamson was also asked why she, as a white person, is the best messenger on the topic of reparations.”Well I don’t know that I’m the best person to do anything, but I’m running for president … so I’m saying what I believe that we should do,” Williamson responded.Williamson, who is proposing a reparations program that would cost between $200 and $500 billion, said that if elected president she would form a “reparations council” to determine how the money would be spent, adding that there would be a stipulation that it be used specifically for “projects of economic and educational renewal.””We’re talking about two and a half centuries of slavery, which were then followed by another hundred years of institutionalized violence,” Williamson said arguing that other nations who have subjected people to various atrocities have also atoned for their actions. “Germany has paid 89 billion dollars to Jewish organizations since the Holocaust … Ronald Reagan signed the American Civil Liberties Act in 1988, by which we paid … the surviving prisoners from the Japanese internment camps … between 20 and twenty two thousand dollars. I think paying anything less than a hundred billion would be insulting.”The push also comes the day after Senate Majority Leader Mitch McConnell, R-Ky., said he opposes reparations because no one “currently alive was responsible for that.”Williamson slammed McConnell’s comments, saying the country cannot be “made whole” until we address issues from our past.”No he does not have a point there. America cannot be made whole until we clean up certain issues from our past. You can’t have the future that you want until you’re willing to clean up your past,” Williamson said.Wednesday’s hearing on Capitol Hill also coincides with “Juneteenth,” a date when the last slaves in Texas learned they were free, brings to the forefront the centuries-old debate over what, if anything, is owed.This report was featured in the Wednesday, June 19, 2019, episode of ABC News’ flagship podcast, “Start Here.”

When asked about the feasibility of her proposal, Williamson said she is not running her campaign based solely on ideas that are popular with a wide swath of the electorate.”I’m not pandering to popularity. Enough of that. That’s the politics I want nothing to do with,” Williamson said. “I’m articulating a vision of what I believe is necessary if we are to be a generation that rises up and is most responsible whether or not people will want to vote for that is up to the voters.”While she has yet to garner more than 1 percent in any public poll of the presidential race yet, Williamson will have multiple opportunities in the next week to get her message out in front of a national audience.She is set to appear on ABC’s The View on Thursday, and next week will share a Democratic debate stage with former Vice President Joe Biden, Vermont Sen. Bernie Sanders, South Bend, Indiana, Mayor Pete Buttigieg and California Sen. Kamala Harris.Copyright © 2019, ABC Radio. All rights reserved.