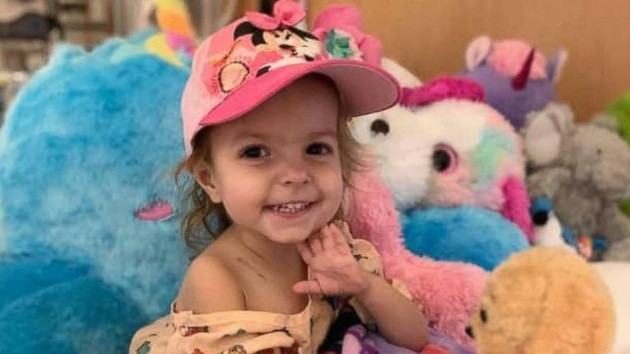 Courtesy The Xydias Family
Posted on June 19, 2019 by ABC News

(ATLANTA) — McKenna Shea Xydias, the toddler who captured national attention after she was diagnosed with a rare ovarian cancer, is now cancer-free.Known to family and friends as “Kenni,” the 2-year-old had four rounds of chemotherapy since being diagnosed on Feb. 15 with ovarian yolk sac tumor. Parents Mike and Meagan Xydias said they received the news of their daughter’s clear bill of health on June 12 from Dr. Katie Sutton, a pediatric oncologist for the Aflac Cancer and Blood Disorders Center at Children’s Healthcare of Atlanta.”Dr. Sutton came in — she just got straight to it and said, ‘Scans were clear. There’s nothing there,"” Meagan Xydias told ABC News’ Good Morning America. “We sat and cried and held each other for a minute.”Sutton told GMA she and her staff are hopeful Kenni will thrive from here on out.”She’s a rock star,” Sutton said. “She had no serious or unexpected side effects aside from requiring occasional blood transfusions.”The side effects of chemo proved challenging for Kenni, but the tot was still her spunky little self, her parents said.”She put smiles on the faces of everyone in the hospital,” Meagan Xydias said.Ovarian yolk sac tumor is a rare, malignant tumor of cells that line the yolk sac of the embryo, according to Cincinnati Children’s Hospital Medical Center. The cause is unknown, and it’s most often found in children before the age of two.This childhood form of ovarian cancer is rare and accounts for less than 5 percent of all ovarian cancer cases, according to the U.S. Department of Health and Human Services.Treatment depends on the stage and location of the tumor, Cincinnati Children’s said on its website. If the tumor is in the ovaries, patients will undergo chemotherapy and surgery.”The immediate reaction was, ‘How could this happen?"” Mike Xydias, a dad of three from Senoia, Georgia, told GMA in February. “I knew of this being [more common] in women. I didn’t realize that it could happen to such a young kid.”In January, the Xydias’ received a call from Kenni’s daycare to pick her up because she was running a fever.On another occasion, Feb. 7, the daycare told the Xydias’ that Kenni’s belly was bloated and she appeared to be uncomfortable. Again, her parents brought her home.”We took her to the doctor — at that point they thought it was gas so they told us to give her gas drops and let them know if she got any more fevers,” Mike Xydias said, adding that Kenni was sent home yet again, a week later with a temperature of 102.”The whole [next] day she was fine, no temperature,” he added. “But she had difficulty using the bathroom. Meagan made an appointment for her Feb. 14 in the afternoon. That day, daycare called. She had a fever of 103.”Mom Meagan Xydias brought Kenni to the pediatrician, where they performed an X-Ray.”They said her bowels looked full and it looked like a big gas bubble,” Mike Xydias said, adding that his wife brought Kenni to the hospital shortly thereafter.Doctors performed an ultrasound that determined there was a mass located around Kenni’s ovaries. Later, a CT and MRI determined there were several cancerous tumors — one 14 centimeters on her right ovary, another near her liver and others scattered throughout her abdomen, according to her father.Days later, Kenni had surgery to remove her right ovary as well as five inches of her small intestine. Kenni’s cancer at the time was stage three malignant.Kenni began chemotherapy, and loved ones rallied around the family with fundraising events hosted by neighborhood friends as well their family in New York. The funds raised helped cover Kenni’s medical bills and supported her parents as they took leaves from their teaching jobs.”The support has been absolutely amazing. It really helped lift our spirits,” said Mike Xydias. “[Kenni] was shy and reserved before all this. With all the poking and prodding and meeting new people, she’s really come out of her shell.”Now that Kenni is cancer-free, Mike and Meagan Xydias are sharing their advice with other parents.”There’s the medical aspect of ‘trust your gut when it comes to your or your child’s health’ and there’s the life aspect of, ‘enjoy every minute,"” Meagan Xydias said.Mike Xydias said it’s crucial to accept support when it’s offered to your family.”People are genuinely good and they want to help,” he said. “[We want to] pay it forward to everyone who helped us.”Copyright © 2019, ABC Radio. All rights reserved.

Amazon driver rescues baby abandoned in Houston, reunites him with mom
Tacoma Police officer who hit at least one pedestrian with patrol car placed on administrative leave
Winter storms moving across US with snow, freezing rain and flooding
‘Worst Cooks in America’ episodes pulled off air after season 20 winner charged with homicide
Pandemic-induced recession is over for the rich but not the poor, Oxfam report warns
Biden to replace White House doctor with long-time physician