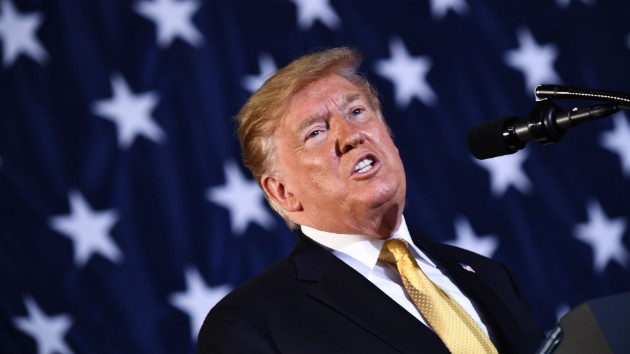 (ORLANDO, Fla.) — President Donald Trump kicks off his 2020 reelection bid in Orlando, Florida, on Tuesday, launching a campaign that’s never really ended. In promoting Tuesday’s festivities at and around the Amway Center, aides indicated that the president’s campaign has never really stopped. They told ABC News that this rally in a critical swing state is meant to add to momentum. “He can’t win the White House without Florida, and we’re going to step up big time to make sure he gets it,” Joe Gruters, chairman of the state Republican Party, said.Starting Friday, the Trump campaign and allies have been hosting a “National Week of Training” across the country for 16,325 attendees at more than 970 events, including, “Trump Victory Leadership Initiative” training sessions and “MAGA Meet-Ups,” according to numbers provided to ABC News by the campaign.America First Policies will also kick off its voter registration drive in Orlando on Tuesday with the aim of spending more than $20 million and registering voters in Florida, Pennsylvania, North Carolina and Georgia.”There are millions of patriotic Americans who believe in the America First movement, but aren’t registered to vote,” America First Policies President Brian O. Walsh said.Trump flipped Florida red in 2016 with just 1.2 percent more votes than Democratic nominee Hillary Clinton. It was the first time the state voted Republican since President George W. Bush won it during his reelection in 2004.While they’ve taken a beating from Republicans in the Sunshine State since 2016, Florida Democrats don’t believe the state has slipped out of their grasp in 2020.”Democrats are still very competitive here,” Rep. Lois Frankel, D-Fla., told ABC News.Trump beat Clinton for Florida’s 29 electoral votes by 112,911 votes, a greater margin of victory than President Barack Obama’s 2012 win over now-Sen. Mitt Romney., R-Utah.Last year’s hard-fought midterm election — so close that it prompted a recount — ended with Democrats losing every statewide race except agriculture commissioner: Rep. Ron DeSantis defeated Tallahassee Mayor Andrew Gillum in the gubernatorial race, and then-Gov. Rick Scott unseated Sen. Bill Nelson, D-Fla., the only Democrat besides Obama to win statewide since the 1990s.Despite the recent string of defeats, state Democrats point to their success in flipping two House seats in South Florida, and the razor-thin margins in the last few statewide contests.”At the end of the day, it will be a close race, and it will be dog-eat-dog,” said Nelson, who has endorsed former Vice President Joe Biden. “The state has been influenced by Trump, utilizing the powers of the president as well as Republican administrations in Florida. You combine all of that in what is effectively a 50-50 state, and you see the trends that occurred in the last two elections.”As part of their push to take back Florida, Democrats are investing in the state earlier than ever before.In a call with reporters on Monday, Democratic National Committee officials said the party already has 90 field organizers on the ground and has spent millions to register 200,000 voters ahead of 2020.The party is also centering its message against Trump on health care, including the administration’s decision not to defend the Affordable Care Act in court, a winning issue for the party in 2018 and one that wasn’t on the table in 2016.Priorities USA, a Democratic super PAC, has launched a six-figure digital advertising campaign in Florida ahead of Trump’s visit on Tuesday, targeting the president on health care and the Republican tax cut that he signed into law in 2017.For Our Future, a progressive super PAC backed in part by billionaire Tom Steyer, is directing its $80 million budget toward organizing in Florida and other battleground states. The group, modeled on some of the conservative organizing groups funded by the Koch Brothers, has worked to keep Democratic voters engaged in between cycles and around issues.One of the group’s focuses in Florida will be activating some of the 1.4 million ex-felons who are now eligible to vote in the state, according to CEO Justin Myers.Multiple 2020 Democratic presidential candidates, including Biden, have traveled to the state. The party plans to hold its first round of primary debates in Miami later this month.In Orlando, only 20,000 attendees are allowed inside the Amway Center, so there were Trump supporters lined up nearly 40 hours early.The Trump campaign was tight-lipped regarding the president’s remarks, but aides said to expect a rousing performance that only the president could deliver. First lady Melania Trump and Vice President Mike Pence, along with Trump’s adult children, are expected to attend, campaign officials told ABC News.Amid a balloon drop, a “retrospective” video of the president’s first years in office and possible indoor pyrotechnics, the event aims to be more than just a rally. Within the campaign, aides have described it as a “mini convention” and a “huge party” scheduled to go on, rain or shine, as the area prepares for possible showers.The festivities will kick off well before the president takes the stage on Tuesday night, with “45 Fest,” an outdoor event at the Amway Center beginning in the morning and featuring food trucks, live music and massive TV screens for the overflow crowd that is expected to descend on downtown Orlando.Copyright © 2019, ABC Radio. All rights reserved.