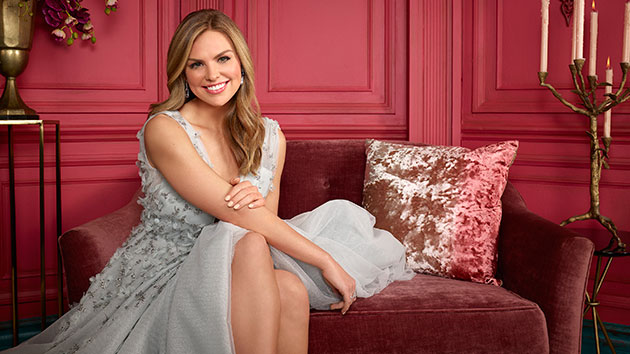 (NEW YORK) — On Monday’s episode of The Bachelorette, the season came to a screeching halt as Hannah, fed up with the drama, threatened to leave.  It was up to host Chris Harrison to convince her to stay.

Following last week’s disastrous one-on-one date with Luke P., Hannah told him she couldn’t give him the date rose and sent him home. However, Luke wouldn’t take no for an answer, and begged her to give him another shot.

Back at the mansion, the other guys anxiously stare at Luke’s pre-packed suitcase, waiting to see who returns to pick it up. To their disappointment it’s Luke, who explains that Hannah didn’t give him the rose and agreed to let him stay.

During her conversation with Garrett at the pre-rose ceremony cocktail party, Hannah reveals that in spite of Luke’s promise beforehand not to talk about the other guys during his one-on-one date with her, and his insistence afterwards that he had kept his word, Mike, Devin and Dylan’s names did, in fact, come up in the course of their conversations.

When Garrett confronts Luke about that in front of the other guys, a loud argument ensues, further angering Hannah. She comes to Luke’s defense, insisting that it was she who instigated the conversations about the other men. Her attempt to “clear the air” only leads to more arguments, and Hannah, storms out of the room.

When she returns, she warns all the men to “stop pointing fingers at other people” and instead focus on themselves and what she needs from them. She tells them it’s not just Luke who makes her feel “psycho and irritated,” but all of them.

The men talk among themselves and agree to put “the petty fights” behind them and focus on their relationships with Hannah.

When host Chris Harrison checks up on Hannah to see if she’s okay, she tells him the arguments are taking up all her time and preventing her from furthering her relationships with the other guys. He tries to comfort her by saying it’s because of their intense feelings for her, adding that everybody is there for her and that it’s her party.

“Party’s over,” she snaps back.

At the rose ceremony, Hannah says nothing and quickly begins calling out the names of the men who will get a rose: Connor, Tyler, Dustin, Peter, Dylan, Garrett — and Luke.

“Now we talk,” Hannah tells the remaining men, explaining that everything that’s happened has made her angry, and that she feels “defeated” and “uncertain” and doesn’t see a future with any of them. “We have got to all get on the same page on how we can [change] that,” Hannah declares.

“I’m trying to work through it, but it’s super hard,” she continues, before leaving them with a brusque “Goodnight.”

Hannah and the guys next jet off to Riga, Latvia, hoping to have left the drama behind them, although Hannah tells Harrison she’s not sure she if she can do that. In fact, she’s ready to quit the show altogether.

That leads into the second half of the episode, which is a look back at Hannah’s journey thus far and how it got to this point, with Hannah and Harrison reliving some of the highlights and low-lights of season 15, including some never-before-seen moments.

Finally, Harrison asks Hannah the all-important question: “Where do we go from here?”

After some hesitation, Hannah finally tells Chris she intends to “see this thing through to the end.”

Here are the nine remaining men:

Connor S., 24, an investment analyst from Dallas, TXDustin, 30, a real estate broker from Chicago, ILDylan, 24, a tech entrepreneur from San Diego, CAGarrett, 27, a golf pro from Birmingham, ALJed, 25, a singer/songwriter from Nashville, TNLuke P., 24, an import/export manager from Gainesville, GAMike, 31, a portfolio manager from San Antonio, TXPeter, 27, a pilot from Westlake Village, CATyler C., 26, a general contractor from Jupiter, FL

The Bachelorette returns Monday at 8 pm ET on ABC.

“Oh, it’s fantastic!” Diane Lane loves the fans prompting the release of the ‘Justice League’ “Snyder Cut”
Liam Neeson reveals his plans to retire from action films
‘Cobra Kai’ star Martin Kove had to be “persuaded” to join the ‘Karate Kid’ reboot
PepsiCo announces plan to reduce emissions more than 40% by 2030
Yelp to display user-generated COVID-19 safety reviews for restaurants
Pelosi declines to say when she will send impeachment article to Senate