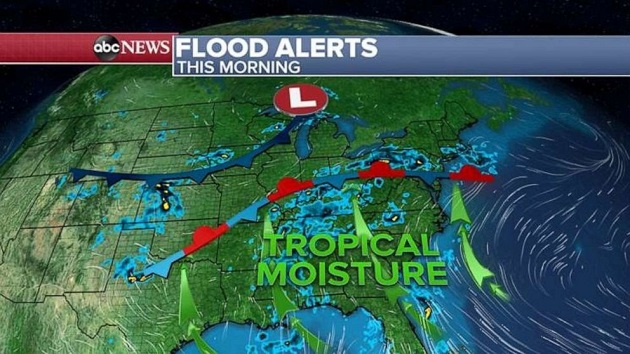 (NEW YORK) — As much as 10 inches of rain has fallen in the Ohio Valley since Friday, causing flooding, necessitating water rescues and creating a mudslide near Lexington, Kentucky. Parts of southern Indiana have seen 10 inches of rain, while up to half a foot fell in parts of Ohio. Other parts of Kentucky have reported 5 inches. There were more than 100 reports of damaging storms on Monday that ranged from the Rockies to the East Coast, including five reported tornadoes. Parts of Texas saw tennis ball-sized hail.More heavy rain and storms are expected on Tuesday for much of the nation.Flood alerts have been issued from Illinois to New Jersey.In the Plains, the combination of a new system from the West with an already-existing one means severe storms are forecast from Texas to Kansas, with the biggest threat damaging winds and large hail — with an isolated tornado a possibility.Some areas over the next few days could see additional heavy rain, locally more than 4 inches.