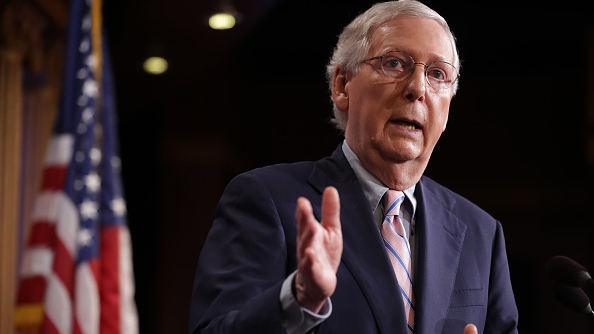 (WASHINGTON) — Senate Majority Leader Mitch McConnell said he opposed reparations for descendants of slaves, because no one “currently alive was responsible for that.””I don’t think reparations for something that happened 150 years — for whom none of us currently living are responsible — is a good idea,” McConnell told reporters during a press conference on Tuesday.”We’ve tried to deal with our original sin of slavery by fighting a civil war, by passing landmark civil rights legislation, by electing an African American president,” he said.McConnell’s remarks come just one day before a House Judiciary subcommittee is scheduled to hold a hearing on the topic of reparations — the first hearing on the issue in over a decade. The hearing will “examine, through open and constructive discourse, the legacy of the Trans-Atlantic Slave Trade, its continuing impact on the community and the path to restorative justice.”Several prominent Democratic presidential candidates have also weighed in on the issue, saying the topic deserves to be studied further.”I think we’re always a work in progress in this country but no one currently alive was responsible for that,” McConnell said.He said that another issue is that it would be hard to “figure out” who to compensate.”We’ve had waves of immigrants, as well, who have come to this country and experienced dramatic discrimination of one kind or another,” he said. “So no, I don’t think reparations are a good idea.”