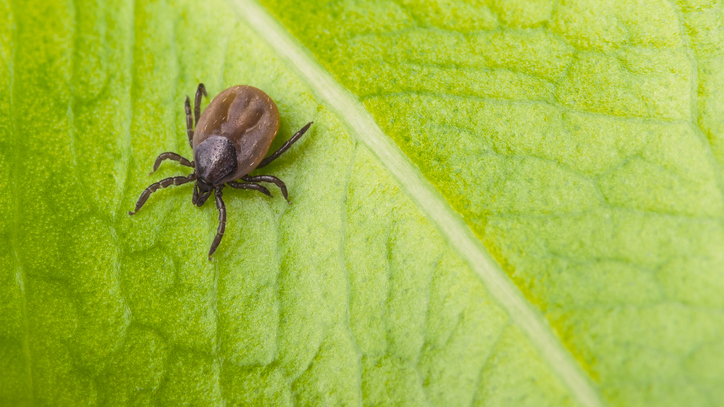 BY: VANESSA CUTLER(NEW YORK) — In a groundbreaking study published in Proceedings of the National Academy of Sciences, researchers from Virginia Tech, Yale and Harvard may have found a reason why some people who get Lyme disease still have the crippling symptoms years after treatment with no sign of the disease still in their blood stream.Post-treatment Lyme Disease Syndrome (PTLDS) occurs in about 10% of people with Lyme disease following standard treatment with antibiotics, and is associated with symptoms like muscle aches, fatigue and neurological symptoms that appear to defy explanation, according to the National Institutes of Health (NIH).The medical community has been divided on whether or not Lyme disease symptoms can show up well after treatment ends. The diagnosis is controversial as there is often no detectable infection coexisting with the symptoms.Dr. Brandon Jutras, an Assistant Professor of Biochemistry at Virginia Tech and lead author of the study said that “it might be time to look for other sources that could be contributing to the symptoms.”“For patients who have documented cases of Lyme disease, it’s reasonable to consider why they are having these kinds of unrelenting responses,” he said.The in this recent study, research suggests that inflammation from a specific particle shed by the Borrelia burgdorferi bacteria — the bacteria that causes Lyme disease — may provide an explanation for these cases.Jutras and his team took samples of joint fluid from a group of patients who had previously been treated with antibiotics for a confirmed Lyme infection and then had persistent Lyme arthritis — tightening of the joints — which is one of the most common ways the long term symptoms shows up.Researchers found that these people had a specific kind of inflammation from a certain particle shed by Borrelia, though none of them had any evidence of active infection in the blood or in the joint. To confirm their suspicions, they looked for the same kind of inflammation in people who had other kinds of arthritis, but were unable to detect it. They also injected the same particle into mice, which caused immediate arthritis within 96 hours.“We think that the body’s response to the particle is going to be important for understanding post Lyme abnormalities” says Dr. Jutras.For patients with PTLDS, additional IV antibiotic treatment after standard care has shown no additional benefit and may actually cause more harm than good, leading to unwanted side effects. There is no cure for PTLD, leading many to seek out alternative treatments that are not validated by the FDA, according to the Center for Disease Control.But Dr. Jutras hopes that these findings will help people with PTLD.“We are trying to figure out how to intervene to prevent the inflammation, to eradicate the particle causing the inflammation, and to find better screening tools,” he said.Similarly, Dr. Robert Glatter, an emergency physician at Lenox Hill Hospital in New York City, who was not involved in the study, agrees that these are promising findings.“We will need more trials, but these results offer a clear target for drug development as well as promise for this debilitating and chronic disease,” he said.Lyme disease is spread by ticks, and has a high prevalence in the northeast and in specific areas in the Midwest, according to the CDC.Vanessa Cutler, MD is a resident physician in Psychiatry at Rush University Medical Center working with the ABC News Medical Unit.