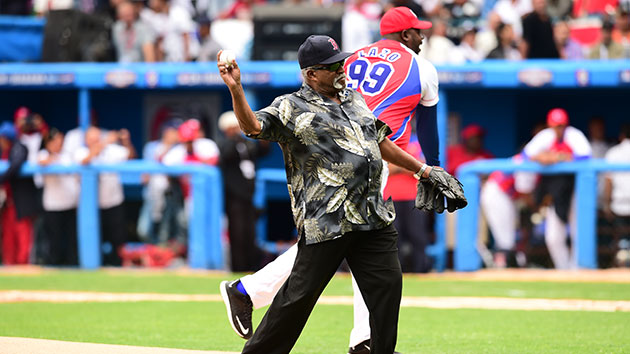 (BOSTON) — Luis Tiant recalls taking the mound at Fenway Park. Every fifth day, it was more than a start. It became an event. The energy with which he pitched brought fans to their feet before the ball even left his hand.They called him, “El Tiante.””My delivery–nobody can do that. And people come to see me… The day I pitch, I got maybe ten, twenty thousand people than the day before.”Before “El Tiante,” however, there came a steep uphill climb to the majors.The popular right-hander details his illustrious 19-year MLB career in his new autobiography, Son of Havana: A Baseball Journey from Cuba to the Big Leagues and Back, and hopes to give readers a deeper sense of the hardships he endured on his path to stardom.”People would say, ‘You’re lucky, you’re lucky, you played baseball. You need luck, but you have to work for it. And I had to work… Nobody gave me anything. “In a conversation with ABC News, Tiant talks about coming to the United States from Cuba, and the racism and bias he faced from his days in the minors through the rest of his time in baseball. One of the biggest obstacles: communicating with teammates.”[For today’s baseball players] it’s a piece of cake compared with what I had to go through. You come here, you’re speaking the language. I remember the players used to tell me, ‘Speak English, you’re in America…’ It was a tough time. I remember the manager used to go to the mound and talk to me, and the only thing I would do is move my hands up and down and say, ‘OK, OK, OK.’ I don’t know what he said. He might’ve called me a lot of stuff I don’t want to hear.”Tiant further describes the racial tension he faced in the Deep South and being separated from his family for almost two decades. He highlights memorable moments from his playing days as well.Tiant finished his MLB career with 229 wins and a 3.30 earned run average (ERA). The former All-Star is hopeful his on-field accomplishments will be honored one more time with a plaque in baseball’s Hall of Fame.Previously on the ballot for over a decade, Tiant, now 78, told ABC News it would be an honor earn a spot, but if he gets there posthumously, he does not want his family to attend the ceremony:”I told my family, if they put me in there after I die, don’t go… I see these guys, they miss it by one vote, then they die then get in… I just don’t get it.”Tiant now spends much of his time in New England with his family and wife, who he credits as greatly helping him endure the hardships he faced during his career.Copyright © 2019, ABC Radio. All rights reserved.