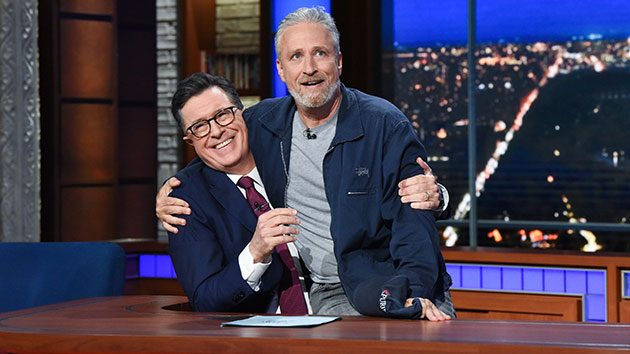 (NEW YORK) — Folks are still talking about Jon Stewart’s emotional testimony last week before the House Judiciary Committee on behalf of 9/11 first responders as he essentially shamed lawmakers — many of whom skipped the hearing — into fully funding the September 11 Victim Compensation Fund.

One of those people still talking about Stewart’s testimony is Republican Senate Majority Leader Mitch McConnell. Now that the House passed the bill to fund the Victim Compensation Fund, it’s the Senate’s turn to pass it — if McConnell will allow the vote.

Addressing that on Monday’s Late Show with Stephen Colbert, Colbert showed a clip of McConnell saying of Stewart’s testimony, in part, “I don’t know why he’s all bent out of shape.”

At which point Stewart himself emerged from beneath Colbert’s desk to answer that question.

The former Daily Show host said he was “bent out of shape for them” — meaning the 9/11 first responders, many of whom are deathly ill from exposure to toxins at Ground Zero and in desperate need of continued funding.  That prompted Colbert to play another clip from McConnell addressing the empty seats during the House committee hearing.

“Members have a lot of things going on at the same time,” said McConnell, “and he sounds to me like he’s looking for some way to take offense.”

After feigning embarrassment and deadpanning, “I didn’t know that they were busy,” Stewart then shouted, “I didn’t mean to interrupt them with their jobs!”

“I know that your species isn’t known for moving quickly,” said Stewart — a reference to McConnell’s appearance sometimes being likened to that of a turtle.  He then accused McConnell of hypocrisy, saying he loved the 9/11 community only “when they serve your political purposes.”

Stewart then issued a challenge to McConnell, saying if he wanted to know why the 9/11 community was so upset, McConnell should “meet with them, tomorrow, as soon as possible, and don’t make them beg for it.  You could pass this thing as a stand-alone bill tomorrow.  Meet with them.”

Stewart ended with a final jab, saying if, in future, McConnell ever needed a first responder to extinguish his burning house, “I’m sure they’ll put it out for good when they feel like gettin’ around to it.  No offense.”