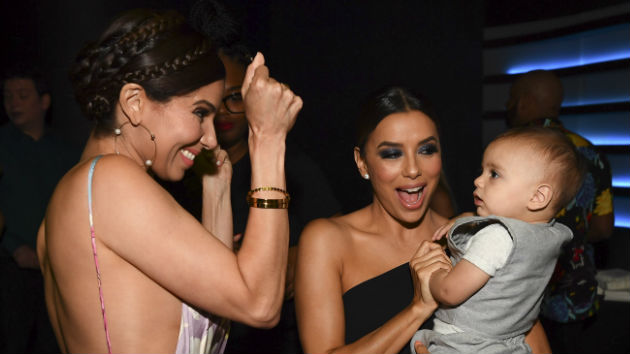 (LOS ANGELES) — Eva Longoria is living proof that women don’t have to choose between their career and motherhood.

She produced, directed and acted in ABC’s soapy new drama, Grand Hotel, while juggling being a new mom to her son, Santiago. Nothing captures that balance better than a photo Longoria posted to Instagram of her breastfeeding while simultaneously directing an episode.

“I think you have to normalize that,” she tells ABC Radio of posting the photo. “And luckily, we were with an amazing crew and cast that knew I was coming back from having a baby and it was gonna be difficult and finding times to pump and feed and breastfeed and I was like, ‘If I’m ever asleep it’s only for three minutes!’”

Roselyn Sanchez, who stars as Gigi on the series and is a mom to young kids herself, supported Longoria.

“She called me one day, saying, ‘Listen, you need to have my back. If I’m a little late on set, just tell them that she’s a mother. Leave her alone. Everybody can sit and wait,’” Sanchez recalls, laughing.

Sanchez adds that having Longoria as a boss set the tone for a workplace where everyone felt comfortable.

“You know, everything starts with a head and when the head is a good woman and she’s respectful and she treats everybody like family, then you go to work happy,” says Sanchez. “And that was a bottom line.”