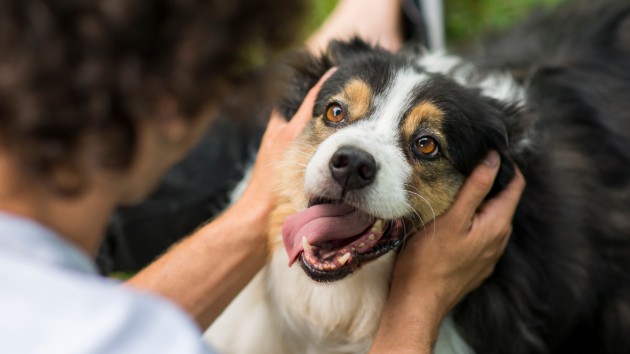 (NEW YORK) — Dog owners convinced that their pup could convey a range of expressions through their eyes now have scientific evidence to back it up. Researchers have discovered a key factor that separates wolves from dogs, involving two specialized facial muscles that evolved after they were domesticated by humans, according to a study published in the Proceedings of the National Academy of Sciences on Monday.Domestication “transformed” the anatomy of dogs’ facial muscles so they could communicate with humans, according to the study. Dogs are able to raise the inner eyebrow intensely, while wolves are not, and behavioral data shows that dogs can also produce eyebrow movement significantly more often and with higher intensity than wolves can.This movement resembles an expression humans produce when sad, “so its production in dogs may trigger a nurturing response,” the study, which looked at both behavioral and anatomical data, states. Scientists hypothesize that the expressive eyebrows in dogs are the result of selection based on the preferences of humans.The study found that facial muscles in domestic dogs and gray wolves are relatively uniform other than around the eye.Humans domesticated dogs more than 33,000 years ago, and as a result, they are able to read and use human communication in ways that other animals cannot, researchers said. Dogs are more skillful in using human communicative cues, like pointing gestures or the direction of a gaze, than even chimpanzees, which are human’s closest living relative.Eye contact between humans and dogs are crucial for social interaction between the species, the study states, adding that dogs establish eye contact with humans when they cannot solve a problem on their own. Eye contact also helps dogs determine whether communication is relevant and directed at them, as dogs tend to ignore human pointing gestures when the human’s eyes are not visible.Dogs also seem to be motivated to establish eye contact with humans at an early age, which could be an indicator of the level of attachment between humans and dogs.”Thus, mutual gaze between dogs and humans seems to be a hallmark of the unique relationship between both species during human cultural evolution,” the study states.The mutual gaze seems to trigger an increase in oxytocin, a hormone that plays a role in social bonding, in both species as well, according to the study.This tendency likely evolved when early domesticated dogs expressed characteristics that elicited a caregiving response from humans, the study said.

Independent investigation underway after Tacoma Police officer hits at least 1 pedestrian with patrol car
Coronavirus live updates: University of Michigan pauses all sports after positive tests
Turbulent week of weather ahead with 3 different storms tracking across US
Families say more should have been done after 3 murders at New York City housing complex
Larry King remembered by celebrities, politicians: ‘A newsman who interviewed the newsmakers’
Police, residents plead for ceasefire after South LA sees 59 shooting victims in 1st 2 weeks of 2021