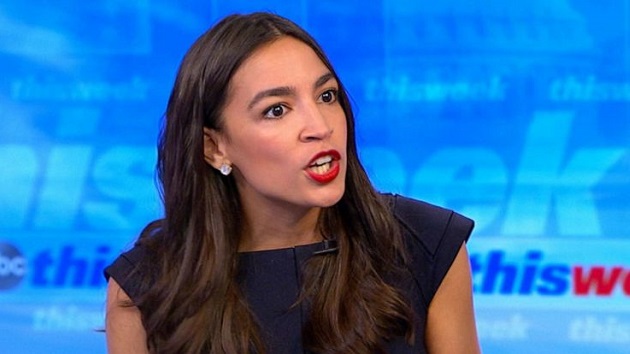 (WASHINGTON) — President Donald Trump and Rep. Alexandria Ocasio-Cortez have been engaged in a Twitter battle since her appearance Sunday on ABC’s This Week, trading barbs over impeachment after her comment that Democrats have a “very real risk of losing” in 2020 without a ‘transformational candidate.”Ocasio-Cortez cautioned against electing a president advocating for “half-measures” and again called for a progressive Democratic nominee. In an interview with ABC’s Chief White House Correspondent Jonathan Karl, she said, “I think that we have a very real risk of losing the presidency to Donald Trump if we do not have a presidential candidate that is fighting for true transformational change in the lives of working people in the United States.”Trump responded Sunday afternoon, shifted the conversation to impeachment, tweeting, “I agree, and that is the only reason they play the impeach card, which cannot be legally used!”

Rep. Alexandria Ocasio-Cortez. “I think we have a very real risk of losing the Presidency to Donald Trump.” I agree, and that is the only reason they play the impeach card, which cannot be legally used!

Ocasio-Cortez fired back about two hours later, saying the president is “bluffing” and opening an impeachment inquiry is necessary when the president “obstructs justice, advises witnesses to ignore legal subpoenas, & more.”

Mr. President, you’re from Queens. You may fool the rest of the country, but I’ll call your bluff any day of the week.Opening an impeachment inquiry is exactly what we must do when the President obstructs justice, advises witnesses to ignore legal subpoenas, & more.Bye 👋🏽 https://t.co/4O9PNbYFki

While she called for a transformational candidate, Ocasio-Cortez is holding off on endorsing anyone for president now, saying on ABC’s This Week that “It’s possible that I’ll endorse later on perhaps, you know, I do not see myself endorsing anytime soon.”More broadly of the Democratic field, Ocasio-Cortez said, “I do think that the field is too large. I do believe that having a competitive primary is healthy and that it’s good, but we have so many Senate seats to take and the fact that we aren’t discussing that more — even if we win the presidency and we don’t win the Senate — we are not going to be able to get a robust agenda passed in the way that we envision it.”Ocasio-Cortez has previously specified that the country needs a progressive president.”I really believe the only way that we’re going to be able to beat this president is with a progressive candidate,” she said to The Young Turks show Rebel HQ earlier this month. “We need candidates that are committed to Medicare for all, to tuition-free public colleges and universities. We need a candidate that is dedicated to passing at least a $15 minimum wage, ideally one that’s pegged to inflation.”On Sunday, Karl asked, “Could you see yourself supporting Joe Biden?”She said that she would support the former vice president — who is seen as a moderate figure and has campaigned on his ability to work across the aisle — if he wins the Democratic nomination.”I think that it is absolutely important that we defeat Donald Trump,” Ocasio-Cortez said, adding, “I think that we need to pick a candidate that is going to be exciting to vote for, that all people, women, people of all genders, races, income levels, geographies feel excited and good about voting for.”

Rep. Alexandria Ocasio-Cortez on the 2020 election: "It's possible that I'll endorse later on … I do not see myself endorsing anytime soon. We haven't even had our first debates yet. I'm very interested in seeing how things play out" https://t.co/3S3qFJFu4C pic.twitter.com/EU69fBAM71

Biden claimed in March that he has “the most progressive record of anyone running.”The progressive freshman congresswoman said that she’s “encouraged” by Biden’s reversal on the Hyde Amendment, which blocks federal funding for abortion, calling the stance the “very base level where all candidates need to be.”However, when asked about allegations of inappropriate touching and comments by Biden, Ocasio-Cortez said, “I do think that there may be some discomfort,” among voters, citing recent comments where Biden told a 13-year-old girl that her brothers need to watch out for her. “I think there are some things with female voters that it’s just not quite locked down.”When it comes to a candidate who articulates her vision of what a Democratic nominee should be, she said of Sen. Bernie Sanders, “I think that [Sanders] does that excellently. I think his policies do that excellently. I believe Sen. (Elizabeth) Warren’s policies do that excellently.”For the time being, however, Ocasio-Cortez said that she and Sanders are focused on being allies in Congress and that Sanders had not asked for her endorsement.Focusing on her work in Congress, Ocasio-Cortez highlighted her reaching across the aisle to work with Republican Sen. Ted Cruz on legislation to ban former members of Congress from lobbying and to make birth control available over the counter.When asked about that working relationship, Ocasio-Cortez said “we haven’t met in person yet, but I do know that we have an ongoing working relationship and I’m extraordinarily excited in seeing what we can accomplish.”Copyright © 2019, ABC Radio. All rights reserved.