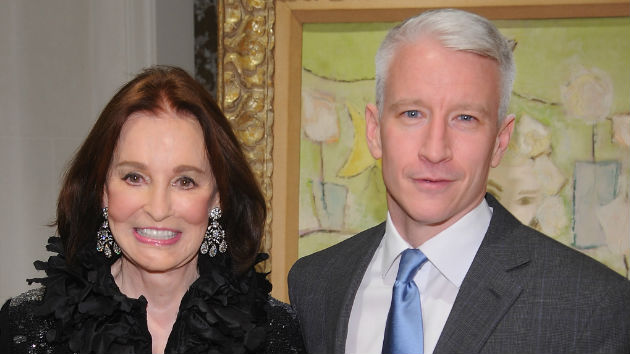 Cooper confirmed his mother’s death on air on CNN, saying she died at home surrounded by family and friends. He said his mother was diagnosed with advanced cancer in her stomach earlier this month, and it had spread.

He also spoke about his bond with his fashion designer mother, describing her as the “strongest person” he’s ever met.”Her private self, her real self — that was more fascinating and lovely than anything she shared the public,” he said.Cooper also described Vanderbilt as a, “visitor from another world … a traveler stranded here who’d come from a distant star that burned out long ago.”He added, “Gloria Vanderbilt died as she lived: on her own terms.”Vanderbilt’s life was often marked with controversy, starting in 1934 when she became the center of a headline-grabbing custody battle between her mother, Gloria Morgan Vanderbilt, and her aunt, Gertrude Vanderbilt Whitney.  Her aunt ultimately won custody of the girl in what was dubbed the “trial of the century.””She had as screwed up a childhood as you could have,” Cooper said about his mother while appearing on the 10% Happier podcast with ABC News’ Dan Harris in October 2017.The heiress was also known as a fashion and cultural icon throughout her life, creating the extremely successful Gloria Vanderbilt Jeans in 1976, and then expanding into other areas of apparel.Vanderbilt also appeared on Broadway and on television and published multiple novels, including her 2004 book, It Seemed Important at the Time: A Romance Memoir.She kept famous company and was constantly in the public eye, counting notable names like Frank Sinatra, Diane von Furstenberg and Marlon Brando as friends.

PepsiCo announces plan to reduce emissions more than 40% by 2030
FBI discusses possibility of explosive devices at expected protests linked to inauguration
Joanne Rogers, widow of Mister Rogers, dies at 92
NY passenger bus hangs off overpass in the Bronx after crash, at least 8 left injured
‘Saved by the Bell’ star Dustin Diamond has Stage 4 cancer
An inside look at a Massachusetts field hospital that’s treated hundreds