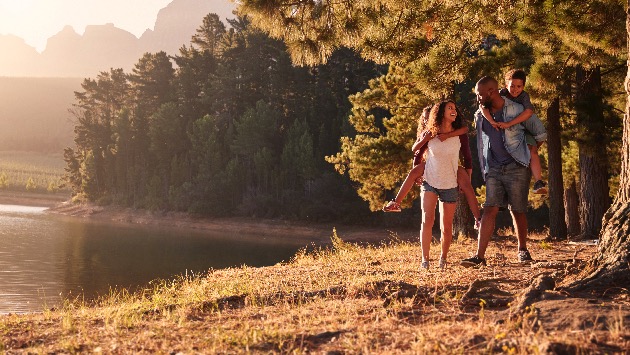 (NEW YORK) — Why do people want to spend time in the great outdoors? Perhaps it’s because spending time in nature actually makes you feel better, according to a new study published in Scientific Reports.Researchers in the U.K. asked about 20,000 people how much time they had spent outdoors during the previous week, then gave them a survey about their overall health and wellbeing.They found that people who had spent two hours during the week in nature were more likely to say they felt better about their health than those who stayed inside.Survey respondents reported “good health or high well-being” after spending at least two hours in nature, even controlling for differences in gender, socioeconomic status and location.Dr. Matthew White, senior lecturer in psychology applied to the health and environment at the University of Exeter Medical School, and the study’s lead author, told ABC news that most people know instinctively that being outdoors makes them feel better.“[W]e see our findings as an important starting point for discussions around providing simple, evidence-based recommendations about the amount of time spent in natural settings that could result in meaningful promotion of health and well-being,” the researchers wrote.They only asked respondents about the previous week, because it’s a time period that most people are able to remember clearly. The people surveyed spent their time outdoors doing a variety of activities — riding horses, playing with their children, exercising or just relaxing.Dr. White’s survey did not ask people about exercise or physical activity done outdoors, which could be a contributing factor for a sense of well-being.So if your mom always said, “Go take a walk outside, you’ll feel better,” she’s was right! Copyright © 2019, ABC Radio. All rights reserved.

PA expands vaccine eligibility, shares vaccine quiz and map, but supply still limited
It’s time to light the lights! ‘The Muppet Show’ coming to Disney+
Five steps you can take now to boost your fitness and avoid severe illness from COVID-19
How to build an emergency fund, how much to save for it and how to avoid spending it
Coronavirus live updates: US reports under 200,000 new cases for first time in two weeks
Two US COVID variants have been identified. What does that mean for vaccines?